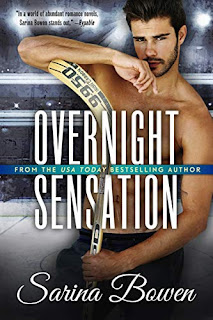 Maybe Georgia has a point. Loving someone means supporting him without expecting anything in return. It's making him a sandwich, or standing beside him when he's facing the worst part of his past.

I can be that friend. Even if it hurts.


Isn't it funny that someone like me whose knowledge of all things hockey mostly came from The Mighty Ducks movie franchise is addicted to hockey romances? Aside from the additional tidbits of hockey knowledge and information I get from this particular sub-genre, there's just something about them that has me hooked (same goes for football--American and what's also known as soccer--and rugby romances). And who do I have to blame for introducing me to hockey romances and getting me all addicted in the first place? None other than Sarina Bowen, whose Ivy Years series was my first foray into the sub-genre and whose subsequent co-written Him and WAGs duets with Elle Kennedy had me absolutely smitten. Then there's Bowen's Brooklyn Bruisers series, which is a loose spin-off of her Ivy Years books, and while the first three were traditionally published, I'm sure I'm not the only one who was did a happy dance when she decided to continue the series on, publishing them independently. Even better, there are AT LEAST two more books I am hoping will become reality should the book gods be listening!

Overnight Sensation has Jason Castro, twenty-five-year-old right wing for the Brooklyn Bruisers, and Heidi Jo Pepper, twenty-year-old intern for the team's front office. The two have been going back and forth with the flirting, but just when the guy given the moniker of "overnight sensation" the previous season thinks he's sealing the deal with the girl everyone calls "Hot Pepper", Heidi ends up taking one Tequila shot too many and too drunk to do much of anything, much to Jason's disappointment. It's a letdown that's very mutual since Heidi has had her eye on hockey star since she started interning for the Bruisers, but now, not only did she humiliate herself by getting soused and throwing up in his condo, he's friend-zoned her and knows she's the younger daughter of the commissioner! But try as they might to avoid each other, circumstances seem intent on keeping them within one another's orbit. Will these two get their shot at finally hooking up, and when all is said and done, will one time be enough for either of them or could they possibly be meant for a far longer run of whatever their "thing" may be?

As usual, there was a whole lot more to Jason and Heidi than meets the eye. Sure, he's the hot hockey player who only lets women go on the Castro train for a one-way trip and she's the pampered daughter who grew up with nearly everything being handed AND dictated to her. However, these two had their individual stories to tell, and while my heart broke for Jason when his was revealed, it absolutely cheered for Heidi as she pushed beyond her comfort zone to prove to her father--and more importantly, herself--that she could handle anything thrown her way. I loved getting to know these two, and the banter between them was wholly entertaining. While there's a whole lot of playful and hot moments that go on with Jason and Heidi, there are also a number of angsty times, which highlighted Jason's more vulnerable side. Of course, I also loved the glimpses of the past couples AND having my curiosity piqued by a few of the other players and staff of the Brooklyn Bruisers, particularly, Silas and Bayer (not together!), and maybe even Tommy. (Hint, hint!) While I wait, I'm giving Overnight Sensations five-plus stars. ♥