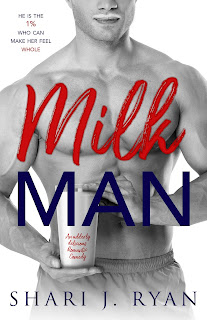 Milkman is the fifth novel in Shari J. Ryan's Man Cave series, which is a collection of romantic comedies, each one a standalone. This is the story of Wesley Moon and Madelyn Wall, both in their twenties and finding themselves to do whatever they have to in order to earn a living. Wesley rose to fame as the Get Milk kid, but as he's become an adult, he can't seem to get rid of that connection no matter how hard he tries. He works as a model, but it isn't exactly his life's dream. When he's brought in for a new ad campaign, he thinks it's just another milk ad, but it's about to bring in a whole lot of trouble, and that may very well include Madelyn, an employee at the advertising firm. In her first day alone, Madelyn already had a feeling this new job of hers was a mistake and how right she turns out to be. She also seems to be stuck with the Milk Dud that is Wesley. Underneath all the mess, however, is an attraction they share towards each other, but with Madelyn as much of a commitment-phobe as she is, is there any hope for her and her milkman?

I'll be honest--I was torn about this book. I enjoyed the first four in the series, and if it's just enjoyment we're talking about here, then yeah, there was a level of enjoyment that I felt here. The thing is, the whole book felt like it was a bunch of events told in chronological order. It lacked a certain kind of flow that would have made it into a seamless read and resulted, at times, with a feeling as if there were gaps in the storytelling. I liked Wes and Maddy, but they didn't have a strong romantic connection or a passionate sort of chemistry that would have made them wholly and consistently believable as a romantic couple. I did like the banter between the two of them as well as whenever Maddy's roommate joined in. Speaking of said roommate--aka Layla--I know there are some readers who didn't like her and saw her as a selfish user, but she actually wasn't all that bad, and if we're being honest here, she did help both Wes and Maddy out. Overall, though, Milkman didn't click with me as well as the first four Man Cave books, and gets three stars. ♥