Review: Maybe Ever After by Cassie Graham 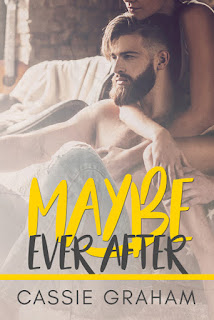 Maybe Ever After is my third Cassie Graham read and it looks like third time's the charm because I loved this friends-to-lovers romance. We have Brynn Darling and Easton Cole, who, along with Brynn's twin brother Bennett, are twenty-six and have known each other for seventeen years and have best friends for just as long. For the past year or so, they also happen to all work together, and all is well and good...except Brynn's been in love with Easton for some time, and she's pretty sure her feelings are unrequited. But guess what? They're not as unrequited as she thinks because Easton's been harboring some major feelings for her as well, and the only person who knows happens to be Bennett. Easton doesn't think Brynn sees him in any other way than as a friend. Then lines are crossed; you'd think there was finally a shot for them...until there isn't...and Brynn gets herself a hot boyfriend in the person of thirty-year-old Hollywood actor Jude Acklin, who happens to be a good guy. Brynn's new relationship status spurs Easton into action but is it too little too late and could their maybe ever after turn into maybe...never?

This was an entertaining read, with a whole lot of feels and a range of emotions. Brynn and Easton and almost everyone else in this book were easily and highly likable--a rarity nowadays in the books I read. I confess that there were quite a few moments wherein I found myself super frustrated with these two, but such is the case when I become emotionally invested in the people I read about. How could I not be considering I was seeing everything as a mere observer and I could easily pinpoint where they were fumbling and getting everything wrong as opposed to when they were getting close to nothing right when it came to whether they should transition from friends to lovers. The author did a great job with the character and story development and I must admit that I was highly impressed with how much I loved the pacing and flow of this book compared to my first two reads from Cassie Graham. Based on the three I've read so far, I dare say that this is my favorite and Graham's best at the moment. If you're searching for a well-written romance this weekend, check out Maybe Ever After. I EVERYTHING it. Five stars! ♥

Purchase Maybe Ever After on Amazon.