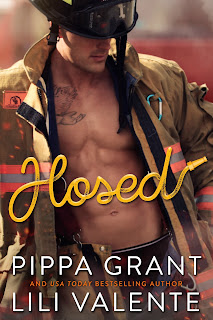 I've read Pippa Grant once before and have read Lili Valente a few times in the past and loved her co-written romance with a fellow bestselling author last year, so I was curious to see how these two would combine their writing styles and processes. The proof is in the pudding, as they say, and the Grant and Valente-created pudding came in the form of the romantic comedy with a hint of mystery suspense read that is Hosed. I liked this book so much that I found myself kinda-sorta-maybe wishing that it was the first in a series, thanks to the a number of supporting characters that I couldn't help but be curious about and hope to get to know better in full-length reads.

Hosed is the story of gamer and coder Cassandra Sunderwall and firefighter Ryan O'Dell, two individuals who went to the same high school and became close when she was sixteen and he was eighteen before they went their separate ways. Years later, Cassie returns to their hometown of Happy Cat in Georgia to take over managing the sex toy factory that her sister owns, not that Cassie was qualified considering that she was a virgin who's never had any experience with sex toys. When an attempt to burn down the factory occurs, Ryan happens to be one of the firefighters on the scene. He can't help but notice her but doesn't immediately recognize her. He also doesn't really understand why she seems to hate him. Their chemistry is hot, but will it burn out due to all their circumstances?

Gah! I adored both the story and the quirky cast of characters of this fabulously entertaining read. Cassie and Ryan had this whole mutual attraction going on, but I was also curious as to what it was that Ryan may have done to have gotten on her bad side years ago. I'm glad there wasn't this whole protracted thing before that tidbit was revealed. The addition of a mystery as to who was causing all the problems for the factory gave the story an element of suspense that I think made it even more enjoyable. I loved the romance and the humor and aside from the main characters, there were also a number of characters on the sidelines who were interesting and had me crossing my fingers that Pippa Grant and Lili Valente were going to venture back into Happy Cat territory to bring readers even more books about the townsfolk. For now, I happily recommend you check out the 4.5-starred Hosed. ♥