Review: Out in the Offense by Lane Hayes (Out in College #3) 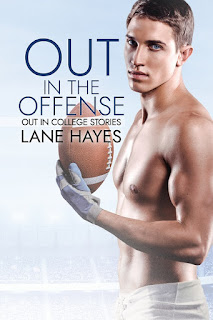 Maybe I'd feel a pang of regret later, because surely begging my sexy tutor to fuck me wasn't my best life choice. However, at that moment it seemed pretty fucking inspired. And he seemed like the best thing that had ever come my way.


This series! Gah! I'd ask if Lane Hayes can actually write a bad romance (shout out to Lady Gaga and totally knocking on wood!), but I don't want to know, and hello, I'm loving everything this woman has written so far. FYI, I've read everything she's written AND listened to every single audiobook she's released. Fangirl much? But how can I not be when I find myself smitten with Hayes's stories and series and characters? My latest addiction is her Out in College series, and while I loved the first two books--Out in the Deep and Out in the End Zone--I do believe I've found myself a favorite in the form of the third and latest one in the collection: Out in the Offense. This new book brings together twenty-two-year-old fourth year Chilton University student, star quarterback, captain of the football team, and very much in the closet Christian Rafferty and twenty-four-year-old Long Beach State graduate, former amateur wrestler, trainer, tutor, and very much out of the closet Rory Kirkland, and it's one heck of a read!

Christian Rafferty knows exactly what's expected of him by those around him: his parents, his coaches, and his teammates. He's supposed to keep the team focused and hungry for each win AND he's supposed to keep his grades up. While he's doing well in almost all his classes, Christian's is THIS close to failing his statistics class, and he can't afford to let that happen, not when he could be benched and have his parents find out. His only option is to find a tutor outside of Chilton, and when one of his coaches offers up Rory Kirkland from Long Beach State, Christian makes the drive to meet him...and is immediately smitten. But while Christian is gay, he's also very much in the closet, so what could he possibly have to offer the openly bisexual Rory? When lines are crossed, will Christian have the courage to embrace his truth or will he be forced to continue living a lie and keep Rory a secret?

Christian and Rory seriously gave me the feels! I adored these two AND their love story! I loved seeing them forging a friendship while also crushing on one another in secret and then finally taking a chance and doing something about it. Christian had his reasons for keeping his sexuality under wraps, and my heart went out to him while he was struggling with what to do now that he had found someone he wanted to share his life with. I chose not to say "now that he had found someone he was in love with" because I really do think he was in love with his ex-boyfriend slash best friend Max Maldonado but they were young when they had gotten together. Speaking of Max, I'm anxiously awaiting his book, and there are a few more that have snagged my attention. I've got my fingers crossed that this series isn't ending anytime soon because I think it's the sort of series that has the potential to surpass the usual three or four books. Maybe that's wishful thinking on my part, but hey, I did warn you I was addicted to this series! Fingers crossed the rest of it will be as awesome as the five-plus-starred Out in the Offense. ♥

Out in the End Zone (book two) - five stars - My Review

Purchase Out in the Offense on Amazon.