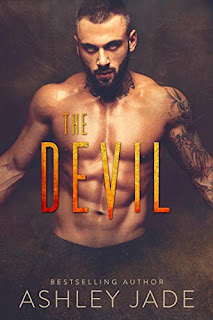 Note: A review copy was provided by the author via Candi Kane PR.

Oh my. I know the title of this novella sounded ominous but I had no idea just how dark it was going to be. The Devil is the first in the Devil's Playground duet and my first ever read from Ashley Jade. It was also originally part of the multi-authored Cards of Love series which was released last year. I went into the book blind, deciding to read it because it's the prequel to the upcoming full-length conclusion to the duet. After having read it, I'm glad I went in with as little information as possible because then the story caught me unaware, making it a more intriguing read.

For the sake of giving the barest of bones: there are three primary characters: Cain Carter, Damian King, and Eden. Twenty-nine-year-old Cain is running for mayor in Black Hallows, Eden is his eighteen-year-old stepdaughter, and Damian is a schoolmate from Cain's past. How those three end up being tied together...well...you'll simply have to read the book to find out. Cain and Damian's history is told in flashbacks and everything else plays out in the present. I won't go into further detail, but suffice it to say that the saying that starts with "Better the devil you know..." isn't necessarily always true, especially when it comes to these three characters. Five stars go to The Devil. ♥

Purchase The Devil on Amazon.