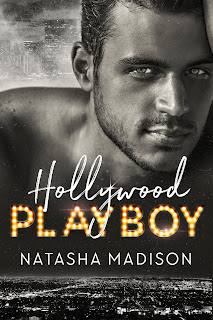 “Please don't do this.” I steady my voice, swallowing, but my lower lip quivering. “Just let it be. Let me be.”

Hollywood romance-themed novels are a dime a dozen. I mean, I'll still read one for as long as it catches my attention even if majority of the ones out there more or less follow the same storyline. Been there done that, but if it's well-written, I'll still be a happy camper. And then there are the extra-special ones--the ones that you think are going to turn out like everything else that came before it and then SWOOSH! It sweeps you off your feet and gives you a love story between a smart and sassy entertainment journalist and the Hollywood superstar she can't stand--and those feelings of dislike are quite mutual, thank you very much. I've read Natasha Madison's past work, and I've enjoyed every single one that's landed in my tablet. But Hollywood Playboy? It's Madison's best work to date.

The Hollywood Royalty series starts off strong with an enemies-to-lovers romance that has fun written all over it. That doesn't mean that it's a fluff love story. This one's got bite, courtesy of a whole lot of dislike floating between the main characters, Jessica Hawthorn and Tyler Beckett. She sees him as an arrogant, spoiled actor and he sees her as a gossip reporter who doesn't care about if what she's writing is true or not. They're thrown together against their will when producers for Tyler's upcoming film decide to do a month-long press tour with ten specific reporters flying with Tyler to ten countries as he's promoting the film. When a truce is called between them, they begin to see each other in a whole new light, and when their mutual attraction is too difficult to ignore any longer, they keep their new status a secret. However, the glaring spotlight of show business is about to intrude on them...

There was no resisting these two main characters or the story that Natasha Madison had to tell. I loved every bit of tension that was swirling around and between them. This wasn't a case of pretending to hate each other because they were actually harboring a major crush on one another. Nope, these two genuinely did not like each other, which is why the evolution of their relationship was such a fascinating thing for me to read about, and Madison did such a bang-up job getting them from enemies to friends to lovers. There were, of course, complications before them, and there was one person in particular who made it pretty clear they didn't want these two playing nice and then doing naughty things together. This had a great mix of humor and angst and romance and sex, and I felt that the characters were thoroughly threshed out. Hollywood Playboy is only the first book in the Hollywood Royalty series but it's set the bar freakishly high, and I for one, can't wait for this author to surpass that bar. Five-plus stars. ♥