Review: Hold Me Today by Maria Luis (Put a Ring on It #1) 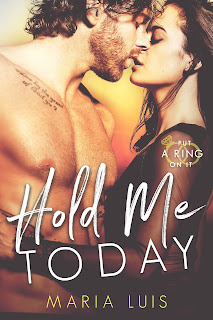 Hold Me Today is the first in the new Put a Ring on It contemporary romance series from Maria Luis. This book is a very different read compared to my first two from Luis, considering that those were part of the author’s Blood duology, which had a darker feel to it. This new book was far lighter, with a spunky heroine in the person of thirty-year-old Ermione Pappas, owner of the Agape salon, and thirty-two-year-old Nicholas Stamos, owner of Stamos Construction. It would be easy to label this a falling-for-your-sibling’s-best-friend love story but Mina and Nick’s tale is so much more than that, making for a really great read.

Mina Pappas’s dream of owning a salon came to a screeching halt when her contractor upped and left with her deposit AND her lucky penny, leaving her with nothing more than an IOU and shoddy plans that may never see the light of day. There may be a solution to the problem, but she’s hesitant for one simple reason: Nick Stamos. They’d known each other since she was six and he was eight, he was her best friend’s older brother, and he had his own construction company. That didn’t mean, however, that asking him for help was going to be easy. They don’t exactly get along all that well, plus she had a crush on him for years. But Nick surprises her when he agrees to help her…on ONE condition. She needs to be his fake girlfriend.

Nick and Mina and the cast of characters they were headlining were an absolutely entertaining bunch! They had me grinning at their exchanging and laughing at their antics, especially when it came to the Nick’s family. Their matchmaking efforts, teasing, and need to butt into Nick’s business reminded me of certain well-meaning relatives on all sides of my own family. Now, there may have been a great deal of humor in this story, but there was certainly a fair amount of angst as well, and that had to do with Nick’s less than stellar love life history and Mina feeling like an outsider within her own family and the Greek community as a whole. I felt for Mina, but she truly came into her own, and having Nick proved she was more than worthy of love. I cannot wait to read the next book in this series! Five stars for Hold Me Today. ♥

Purchase Hold me Today on Amazon.