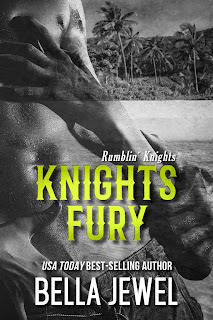 Knights Fury is the second book in the Rumblin' Knights series penned by Bella Jewel, and it's about the youngest of Knights brothers. Just like his brothers before him, Finn Knight carries the scars of their past with him. He also happens to be carrying a whole lot of anger, but it isn't the care or affection of his older brothers that he craves--it's sex. He needs it on the regular, which is pretty much why he can't do relationships. He doesn't make promises to the women he sleeps with, and one of those women is Erin, his brother's girlfriend's best friend. But when Erin finds out that Finn is sleeping with Indiana, the receptionist for the family-owned Rumblin' Knights, she makes it clear that while she isn't demanding he commit to her, she also won't share. It's then that Finn gets territorial, unhappy when Erin starts flirting with other men. Maybe it's time to give being in a relationship with Erin a shot. She's the one woman who makes Finn feel like what they have is beyond sex. She's a game changer. Unfortunately, not everyone is happy with the turn of events, and will do anything to spoil Finn and Erin's possible happy ending.

I wasn't a fan of the first book, and thankfully, this second one is several notches up from its predecessor. There's more of a story going on that concerns the couple, and not just one of them. Erin also happens to be a woman who says what she means, although she does slip up a couple of times and gives in to her feelings for Finn even though he's screwed up. I do wish that the author delved more into Finn's anger; this also wasn't wholly resolved. There's also the added distraction of Brody, Finn's kinda-sorta-maybe friend. It would have been nice if his side story was more subtly hinted at or mentioned, like that of Lucy, Shania's younger sister, and the secret she was keeping from everyone (clearly secret keeping runs in the family). While the story was better here, I did have a couple of issues: first was a hint of repetitiveness, and second was the lack of subject in sentences, which can change the meaning of the sentence entirely. It's a constant in a lot of the MC romances I read, but does every utterance out of the characters' mouths require missing subjects (nouns or pronouns)? 3.5 stars go to Knights Fury. ♥

Read my reviews for the Rumblin' Knights series: