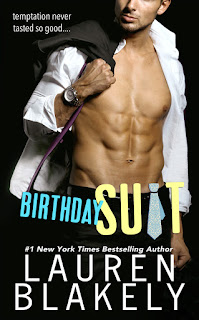 Note: An advanced reader copy (ARC) was provided by the author. The audiobook is a personally owned copy.

My heart drums against my chest. It’s too big for my body. It occupies too much space. At last, I say words that I’ve held tight inside me for years. Words that I shoved down and vanquished.

She trembles. “You can have me.”


Oh my heart! Just when I thought it was safe to wade back into a Lauren Blakely read without risking her taking yet another piece of my heart after she nearly obliterated it with Unbreak My Heart—my best read for 2018 and Blakely’s best so far—she gives us Birthday Suit. I went into this book expecting to be smitten yet again by Blakely’s writing; instead, I found myself swept away by a love story about two people tied together by ten years of friendship, one heartrending tragedy, and a couple of secrets that could change everything between them. I know it’s only January, but I don’t think it’s too early to already add this title to my list of best reads for 2019. I mean, come on—ever since I started reading Lauren Blakely’s stuff, she’s yet to not make an appearance on my year-end lists of favorite reads, so this is a no-risk addition. It may also end up on a whole 'nother list but more on that later.

It goes without saying that one should never fall for their best friend’s girl, and it’s a tenet that Leo Hennessy has lived by…even though, technically, he had already fallen for Lulu Diamond even before she had fallen for his best friend, Tripp Hudson. Fast forward a decade after they first met in culinary school, and Leo and Lulu find themselves in a mutually beneficial partnership. As executive vice president of Heavenly Chocolates, Leo’s tasked to find the company’s next “Rising Star”—and this year, that title goes to none other than Lulu, a chocolatier beyond compare with an up and coming shop to boot. The closeness between the two friends is still as strong as ever, but now there are new feelings that appear to be developing. But could those non-platonic feelings of his really be as new as Leo would like Lulu to believe, and could a promise made put a stop to their happily-ever-after?

Did I forget to mention that I did a read AND listen combo for this? Yep. I had the audiobook preordered and decided to wait until release day to do this, and gah! Talk about being worth the wait. Based on the Lauren Blakely-penned stories that I’ve read, they’ve always translated well as audiobooks, thanks in large part to the narrators that have graced them. With Birthday Suit, however, we don’t get just one or two narrators—nope, we’ve got a slew of them! Yep, while Sebastian York and Andi Arndt headline the audio as Leo and Lulu, respectively, listeners also get—in alphabetical order—Joe Arden, RC Bray, Jason Clarke, Shane East, Dion Graham, January LaVoy, Erin Mallon, Robin Miles, Savannah Peachwood, and Julia Whelan. Whew! As many as the narrators are for this book, they all actually make it work quite fabulously! This was a first for me, and I was smitten by the whole experience.

This was an absolute gem of a love story, a friends-to-lovers tale that has enough of Blakely’s creativity and originality to make it her own and stand apart from the countless others that use the romantic trope. There’s humor, heart, and heat, which is basically what I call Blakely’s TFW—trifecta for the win—and she employs the three effortlessly to give fans and readers a contemporary romance that makes you smile and laugh while also giving your heart a workout from the feels, and when I say “feels”, I’m not necessarily talking about angsty ones, although yes, there’s a hint of angst here. With a kickass cast of characters led by a couple of main characters who truly had a bond based on friendship but were always meant for me. And that audiobook? Sheer genius! Lauren Blakely has outdone herself with Birthday Suit. Five-plus stars. PS: Make sure to have a chocolate or ten on-hand! ♥