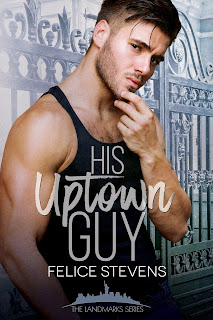 Note: An advanced review copy (ARC) was provided by the author via Buoni Amici Press.

If you’re familiar with Felice Stevens’s books, you’ll know that almost all of them are set in her home state of New York, and one of the things I love most about those books is that you get a very clear sense of just how much love this author has for the local places she mentions, and none more so than in her Landmarks series. She’s just released the second novel in the aforementioned collection, and His Uptown Guy definitely raises the bar that was set by the series starter, Under the Boardwalk. This was second book was a story about two men born and raised in New York—one in Manhattan and the other in the Bronx—and having lived very different lives before their paths cross in the legendary landmark that is the Dakota.

Life changed for Jesse Grace-Martin when he lost his beloved father during the terrorist attacks on September 11th, 2001. Over time, his mother withdrew, later moving to Connecticut to live with her second husband. Jesse began to see the evils of the world around him and how anything and everything could be taken in one fell swoop. A mugging early one morning becomes Jesse’s breaking point, and his apartment in the Dakota becomes his refuge—one he then never leaves over the next five years. Now thirty, Jesse begins to wonder if his refuge is now his prison, but he continues to struggle with leaving its confines. When twenty-five-year-old porter Dashamir Sadiko happens to be there when Jesse has a panic attack, it’s the start of a hesitant yet hopeful friendship and subtle attraction between them. Can Dash overcome his issues with Jesse’s wealth and Jesse with his agoraphobia and anxiety to make a go of it?

Goodness but how I loved these two! Gah! Jesse and Dash seemed like such opposite, but actually, they were exactly what the other needed. My heart so broke for Jesse; his back story and the life he’s led since then had me close to tears, so the manner in which he develops as a character was inspiring, imagining only what sort of courage it would have to take to get him to the point of taking that first step outside the Dakota. Then there’s Dash, who had his own struggles, juggling trying to finish his accounting degree while working as a porter at the Dakota and helping out his mother whenever he could. You’d think that one’s burdens were lighter than the other, but you can never really judge until you’ve walked a mile in their shoes, and both Dash and Jesse had to shore up their confidence and courage in order to move forward with their respective lives and to make a true go of their relationship. I liked Under the Boardwalk, but His Uptown Guy had a story and a cast of characters that made it all too easy to love. This garners five stars.

Read my reviews for the Landmarks series:

His Uptown Guy (book two) - stars - My Review (posted above)

Purchase His Uptown Guy on Amazon.