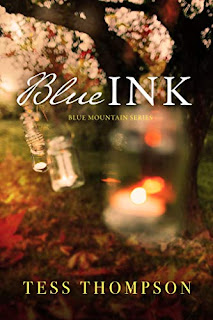 That kiss! I'm a writer, prone to romantic notions, so it should be assumed I exaggerate certain moments of my life, both good and bad. I add color or emphasize certain details for dramatic purposes. But not this. The heat of his mouth against mine obliterated every kiss that had come before.

His kiss pushed aside the past and altered the course of my future. From that moment on, I belonged to Arden Lanigan.

I'd always belong to him. I just hadn't met him yet.


It was by way of Blue Midnight that I discovered Tess Thompson's writing, and what an impression she left me with! That was quickly followed up with Blue Moon, and with both books being part of one series--Blue Mountain--I was looking forward to seeing what sort of stories Thompson had waiting for the rest of the Lanigan clan. But it would take about three years before I got a re-introduction to the author courtesy of her five-book Cliffside Bay series which I very much adored. As much as that series resonated with me, however, I always had the Blue Mountain series at the back of my mind, and then voila! I found out the much-awaited third novel had a release date, and I kid you not, I squeed in excitement! With how much I loved the first two books, it goes without saying that my expectations were going to be rather astronomic. So, did Blue Ink pass? Nope. It surpassed expectations.

He may be in his forties but Arden Lanigan still believes in falling in love and finding his soulmate. He's seen his two brothers find true love and he would love nothing more than to have that for himself. The thing is, he's already been told who his soulmate is and with one phone call asking her to take on the job of being the caregiver for the ailing matriarch of the Lanigan family, he awaits the arrival of thirty-year-old Charlotte Wilde. He already knows what she looks like, courtesy of the author photo in the lone book she's been able to publish--a mystery read that he and his mother enjoyed reading--but Arden is still taken aback when he finally meets her in person. From the get-go, they share an uncanny connection, one that seems almost like it could only happen once in a lifetime. Charlotte's presence brings warmth and love into Arden's home, but when elements from the family's past come calling, will Arden and Charlotte as a couple and the Lanigans as a family still be upright when they're tested again?

You know how I said I had expectations? Well, Tess Thompson more than met them, giving me and other readers a book that had Charlotte and Arden's love story at the forefront while also having a number of other side stories that tie into the family as a whole to add even more flavor to this wonderful read. My favorite thing had to be the fact that there was more than one love story that was being told along with the addition of a bit of a mystery PLUS a twist. Among the three, the last one I pretty much figured out from the moment a certain character from the past makes a reappearance, but I certainly didn't expect it to play out the way it did! And while Arden and Charlotte's romance was nearly flawlessly easygoing, the other romance was more heartrending yet hopeful. As was the case with the first two books, I appreciated the element of family and the overlaying feel of reconciliation when it came to the Lanigans. Ah, this family has my heart. For so long, they were cloaked in mourning and loss, but slowly and surely, they're finding their way towards each other. Insert satisfied sigh. Five-plus stars for Blue Ink. ♥

Read my reviews for the Blue Mountain series: