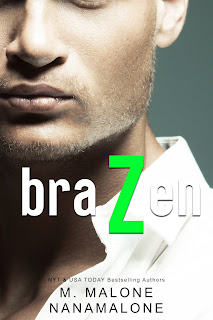 Brazen may be the first in the duet by the same name, but it also happens to be part of a larger series called Blake Security Team. Now, this book happens to be my first from the writing duo of M. Malone and Nana Malone, and I did do a quick check on Goodreads to see if it was part of an ongoing series prior to signing up to review and promote the book. There weren't any reviews at the time, so I went ahead and signed up, curious to experience the writing of these two bestselling author after seeing the positive reactions from many readers. Here's the thing: I should have listened to my gut because my gut was telling me that this book was probably part of an already existing collection of stories...and I was right. Sigh. I'll get into that at the later part of my review. First, a summary!

What happens in Vegas stays in Vegas, right? Not when the one person who broke your heart happens to be the very same person you now have to stay in close proximity to. Three years ago, Oskar Mueller and Hailey Livingstone spent an unforgettable time together in Sin City, and then he walked away without a word. When Hailey's life is threatened, her father decides to bring in people who will be able to keep her safe while also finding out who's trying to hurt her and why. The last thing Hailey expects is to come face to face with Oskar, having no idea that he was part of the security company her father hired. Now, the two have to spend a great deal of time together, but being with the person who ditched you may not be as strange as learning that you both got hitched.

I'm somewhat of a stickler when it comes to reading books in a series in order. I like having the back stories and histories leading up to whatever may be the newest book in place, so that I don't feel like I'm missing anything. I know a lot of authors like to say that a book in a series can be read as a standalone, but let's be honest--there are recurring characters and inside jokes and information that were made in earlier books, so when they're thrown around in the newest one and you never read the earlier stuff, you're clueless...which I was to a degree, like I was missing something. However, the romance and suspense elements were quite good, the main characters likable, and the Malones' writing admirable. Brazen ends in a cliffhanger, with a month-long wait for book two. Four stars. ♥