Review: Out in the End Zone by Lane Hayes (Out in College #2) 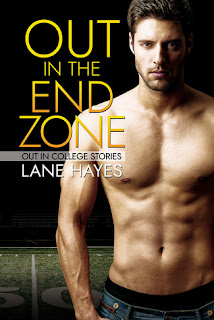 Well, now I know what Evan di Angelo and Mitchell Peterson were doing behind the scenes while Derek Vaughn and Gabe Chadwick were getting their act together and going from enemies to lovers in the Out in College series starter, Out in the Deep. Evan and Mitch's story plays out in Out in the End Zone, and Lane Hayes gives fans and readers a sweet story about being true to yourself and realizing that being open about who you really are is something that you need to do for you and for anyone else. This can be read as a standalone, but if you've read my reviews in the past, especially when it has to do with books in a series, this piece of advice I'm about to give shouldn't come as too much of a surprise: read the books in order, especially since book one as a great read, too.

Evan di Angelo and Mitch Peterson were introduced to one another a few years ago, so they're more acquaintances than they are friends. However, Evan can't quite pretend he isn't curious about his fellow senior and twenty-three-year-old. A quick glance at them makes it obvious how different they are, especially since Mitch is an out and proud gay guy and Evan is very much straight. Or is he? There are things in Evan's past that he's tried to keep buried, still unable to fully let go of the guilt and responsibility he feels. But maybe helping Mitch out on his final project for a class will prove to be a catharsis of sorts for Evan. This could also be an opportunity for the two of them to get closer, but when they get closer than expected, will Evan be able to be as out and proud as Mitch?

Oh, how my heart went out to Evan in this book! His was one of those cases where his spirit was strong but his resolve tended to waver, whether it be out of fear of rejection or judgment or something else altogether. And Mitch was such a great guy, full of understanding and acceptance, but I also felt that he deserved better than to be yet another guy's secret. So, where did that leave these two? Well, let's just say that sometimes you need to take a step back in order to move forward. Yeah, I'm leaving it at that because I don't want to spoil it for those of you who have yet to discover the wonderfulness that is this series. I'm giving Out in the End Zone five stars out of five stars, and that sneak peek at the third Out in College book, Out in Offense, has me eagerly awaiting the arrival of 2019. ♥

Purchase Out in the End Zone on Amazon.