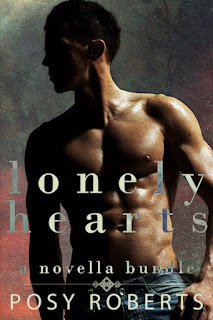 Lonely Hearts is a collection of four previously released novellas penned by Posy Roberts that have been tied in to her North Star trilogy. You don't necessarily have to read that particular trilogy in order to fully enjoy this collection of Roberts's, but for fans of the author that are familiar with Hugo Thorson and Kevin Magnus's second chance love story, the tie-in was a nice touch. Each story is basically a standalone, but they're all tied together by the fact that one main character from each of the stories--Luther Almond from Bent Arrow, Marc Lundberg from Stroke of Luck, William Harris from Momo, and Andrew Summers from Love on a Battlefield, plus Hugo from Spark, Fusion, and Flare--are part of the same chat room. Every single one of them finds love and each shares their experiences.

Bent Arrow is Luther Almond's story, and he's a man who's been more than okay with hook-ups. He loves showing other men just how satisfying it is to be with someone of the same sex. When he meets Erik Heat, however, Luther finds himself wanting more than rushed trysts, but when he begins to recognize that actual feelings are involved, he's at a complete loss as to what to do next. Both Luther and Erik were intriguing main characters as individuals, and it was fun seeing how they were going to find their way out of their hang-ups when it came to commitment and issues with their past to have a shared future together. This was a good start to the bundle and gets four stars.

Stroke of Luck is Marc Lundberg's story, and he's practically homeless after losing everything in a fire. He's temporarily living in a model condo, and he's barely got any money left. He meets Cas Elias, and the two are very clearly attracted to one another. Living in the same condo building seems to be a plus, as well, but Cas fears that Marc will be just like every other guy he's gotten involved with, thinking Cas's living with his ex-girlfriend slash best friend is weird. This was a low angst read, and Marc and Cas were easily likable guys with some real chemistry, so I was more than entertained while reading their love story unfold. So far, so good, with this story getting four stars.

Momo is the story of William Harris, a man who values his privacy and has an air of reservedness about him that makes it difficult for other people to get close to him. When he meets a geisha named Momo, though, he's more than tempted to throw his usual sense of caution aside. Momo turns out to be Nate Kelly, who is as opposite to William as one could get. I had originally read this novella in its original form as The Measure of Man and its reworked version sometime last year. Re-reading it simply reiterated everything that I had loved about it the first couple of times. William and Nate's love story is my favorite in this novella collection and it easily garners five stars.

Love on a Battlefield is the final story in the bundle and it's all about Andrew Summers and Shep Wells who meet at eighteen during a reenactment of the Civil War. They part ways because life has to continue even though they're apart. They keep in touch over the next five years, with life taking them in different directions. A reunion between them could prove that their connection was a fluke...or something far more. When I first read this story early this year, I ended up giving it a four-starred rating, but re-reading it allowed me to have a better appreciation for Andrew and Shep's tale, which leads me now to award it five stars, and this bundle an average rating of 4.5 stars. ♥