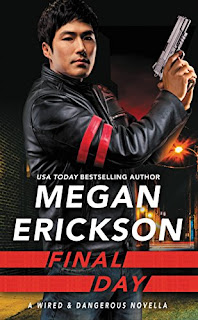 I've been itching to read Erick Lee's story ever since Megan Erickson kicked off her Wired & Dangerous series with Zero Hour. Fair warning: I may mention things in this review that may be considered spoilery if you haven't read the two full-length novels that came before this novella. So, my feelings won't be hurt if you feel the need to stop reading because you don't want any of the books to be spoiled for you. If you're cool with reading on, please go right ahead! I may fangirl a bit going forward because of my love for Megan Erickson's writing in general and my utter adoration for this romantic series of hers in particular. Again, consider yourself warned. Ready, let's continue!

Final Day is a novella--and the third release in the Wired & Dangerous series--and it picks up some time after the events in the second book. Erick Lee has been keeping tabs on Tarr, the mercenary who not only saved Erick's life but that of Erick's close friend's. When the brother of one of the men Tarr killed on the night he saved Erick threatens to come after Tarr's sister and her family, the lone wolf has no other alternative than to lean on Erick and Erick's crew to help him. Things are testy and tense between Tarr and Erick as they race to get to Tarr's sister in time, but the source of that tension is something more than the two bargained for. Erick's loved only one man--Flynn Brennan, a loss he still mourns. Could he be with someone like the men who murdered Flynn--a paid killer?

Snark? Check! Suspense? Check! Sexual tension? Check! Sweetness? Surprisingly enough, check! There was nothing that I didn't love about this book. For such a short read--at least compared to the two that came before it--it was packed with action, romance, and suspense and a whole lot of back and forth between the thirty-year-old Erick and forty-one-year-old Tarr (aka Everett "Rett" Hawk) that had me happily entertained for an hour. I swear, there were times I found myself grinning like an idiot at these two, but then there were some definite moments where my heart squeezed in empathy for them as well. Erick and Rett had their respective baggage to deal with, and I wanted to give them a hug--though I'm not too sure Rett would appreciate me hugging him...or me hugging Erick, for that matter. I seriously hope this isn't the last we see of this addictive series! Final Day receives five stars. ♥