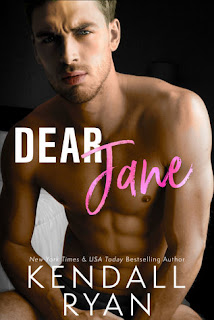 Ooh! A sports romance from Kendall Ryan? Yes, please! Dear Jane is not only the author's latest release, it also happens to be the first in her new yet-to-be titled series about the players of the fictional professional football team known as the Chicago Hawks. This is a second-chance romance between newly acquired quarterback Weston Chase and assistant team manager Jane Royce. They were each other's first love and first everything else, but when Wes went off to college, the distance and football became too much for them, leading Jane to do the only thing that she could: break things off. Ten years later and they're both in the same world of pro football, but their paths have never crossed...not until Wes is brought in to replace the injured starting quarterback for the Hawks. He knows all too well how much he hurt Jane a decade ago, but maybe they can clear the air and, at the very least, be friends again. He wants a second shot with her but she wants one chance to let him know she's over him. Can two people who were once in love truly keep things platonic, or could this be the continuation of Jane and Wes's story?

I've like a lot of Kendall Ryan's books, but I confess that there's only been a couple that I've truly loved so far this year--one of which just happens to be on my list of favorite reads for 2018. Well, Dear Jane was definitely one that I fell in love with. This was a romance that didn't feel rushed, with two main characters who were well threshed out, allowing me to really get to know them. I loved that Jane was such an independent woman, and I totally understood where she was coming from when she learned that her ex was going to be returning to their hometown of Chicago to be part of the team she loved. I'm glad that she wasn't so easily swayed by Wes, and that Wes did have to work a bit harder than he may have expected to win her trust back, what more her affection. One of the standout supporting characters here as Alexei Ivan, aka Alex, who was Wes's teammate and Jane's closest friend. His story is up next in this untitled series, and if it's as good as this series starter, then I'm going to be a very happy and satisfied camper indeed. The one thing that stopped me from giving this an even higher rating was the slightly cheesy "grand" gesture that Wes made, but I appreciated his efforts nonetheless. Dear Jane gets five stars. ♥