Review: Son of a Preacher Man by Nichole Willowbrook (We Rise #1) 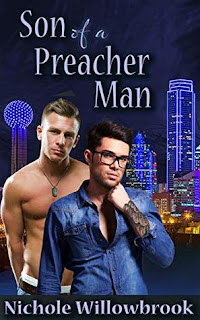 Son of a Preacher Man is a second-chance love story slash romantic suspense read penned by Nichole Willowbrook, and it’s the first in her We Rise series. After seven years in the marines, Tate Nilsson is honorably discharged in order to return home to care for his beloved ailing mother. When she passes, he’s at a complete loss as to what to do next with himself. An opportunity to work for a private security agency comes around, and Tate is assigned as the bodyguard to the bisexual son of a prominent—and very conservative—pastor. The fact that quite a few bodyguards have come and gone makes me Tate wonder what could be wrong, but his main focus needs to be to make sure Christopher Green is kept safe from those sending him death threats. That focus, however, wavers when Tate finally comes face to face with his new protectee…who just happens to be the boy he fell in love with—and whose heart he summarily broke when Tate left for boot camp--when they were both eighteen, seven summers ago: Noah. Tate vows to keep things between them professional, but his heart wants to get all too personal.

This was a really good read, one that had a nice element of suspense to it, courtesy of the stalker who has it out for Noah and Tate trying to figure out who it could be. It’s the romance part, however, that was more prominent in this story, what with two guys who met and fell in love as teenagers years ago only for them to be thrown together by circumstance once again in their twenties. I liked their chemistry, especially since they seem to bring out parts of one another that had been buried the whole time they had been apart. I will say, though, that Tate didn’t have the whole “bodyguard” vibe to him. He lacked the stoicism and single-focused nature that I’ve come to expect from a bodyguard. His love for music was interesting and definitely gave him something in common with Noah, but it wasn’t as delved into as I would have liked. What definitely deserves props is the mystery part because it provided a good twist to the story and the role of fate and how there are just some things that are meant to be. Overall, I appreciated the author’s writing and will be looking out for book two. Four stars for Son of a Preacher Man. ♥

Purchase links for Son of a Preacher Man will be posted once they're live.