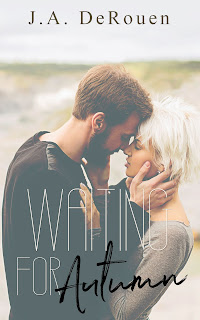 Originally released as part of the multi-authored Begin Again anthology published at the beginning of this year, J.A. DeRouen reworks her contribution to that effort and makes Waiting for Autumn a full-length second-chance love story. If you're like me and have read the original version, I'm going to highly suggest that you still read this full-length edition from the beginning. In short, what was in the anthology has not been transferred verbatim in this new, longer version. I remember mentioning in my review for the anthology that DeRouen's contribution did feel more like a prequel of sorts, so the ending there did leave everyone hanging. Here, we finally find out if Sebastian Kelly and Autumn Norris make the most of their second shot at a happily-ever-after and the challenges they'll face.

There was no other threesome as formidable as that of Sebastian Kelly, Brady Norris, and Autumn Norris. Seb and Brady were the best of friends, Brady and Autumn were siblings, and Seb and Autumn were very much in love. Racing one another for something has been the norm for Seb and Brady, but there was nothing normal nor ordinary when an unfortunate accident happens. In its aftermath, the lives of these three are transformed, and it isn't until five years have passed that their paths criss-cross once again. Amidst the feelings of hurt, betrayal, and abandonment brought about by too many years apart remain the tendrils of love and friendship among all three, but while Seb and Brady's friendship is easy enough to fix, Seb and Autumn's relationship may be far too damage to salvage, especially considering that when Seb left Autumn behind, he left someone else as well--their daughter.

When it comes to J.A. DeRouen's books, I know to expect two things: impressive writing and lots of angst. DeRouen delivers on both, and if I thought the prequel-like story in the Begin Again anthology was very good, her full-length novel version left me more than satisfied. Seb and Autumn have A LOT of issues that they need to overcome, and these two needed to get their acts together for the sake of their daughter, Aria (not a spoiler, peeps--Autumn's pregnancy is mentioned in the official blurb). As always, the author ticked all my boxes, and I've got my fingers crossed that Brady gets his own story sometime very soon. I'm giving Waiting for Autumn five stars. ♥

Purchase Waiting for Autumn on Amazon.