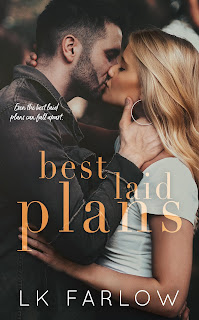 Best Laid Plans is my second read from LK Farlow, and I'll be honest, I was worried going in because my initial read from her--Rebel Heart--had left me rather impressed. So yeah, expectations and the like were set, and well, I'm happy to report that they were pretty much met. This standalone--which I hope has a spin-off in the works, but more on that later--had a couple of well-loved tropes: falling for your best friend's sibling and single parent romance. You could maybe throw in second chance romance in there as well, although more in the vein of getting a second chance to finally getting it right. There's humor and a bit of drama, and oh yes, loads of romance as well!

When Natalie Reynolds was seventeen, she thought she had her life all planned out. Two things she didn't plan for was her brother's twenty-year-old best friend--also known as Alden Warner, her longtime crush--not remembering their night together and her getting pregnant before graduating from high school. She makes two important decisions: to keep the identity of her baby's father a secret from everyone and to not let her brother's best friend know that he was going to be a father. So when four years pass and Alden returns to their hometown to buy back the diner his family once owned, not only does Nat have to figure out how things will be with him as her boss but also how she'll come clean and confess to Alden that he's got a precocious three-year-old daughter named Tatum.

I love how LK Farlow managed to surprise with the direction she took Alden and Nat's story. I'm not a huge fan of books that have the parentage of one character being denied or hidden, but both the motivation behind Nat's decision AND Alden's subsequent reaction to the revelation later on more than made me temporarily forget--at least for the duration of this book--my usual aversion to this particular story angle. I seriously liked both Alden and Nat, but I adored little Tatum! One of my favorite things about this story was seeing how Alden and Tatum's relationship flourished as father and daughter, and thank goodness there wasn't a whole lot of drama from Nat as to the attachment Tatum had to Alden from the get-go. I enjoyed Best Laid Plans and heartily recommend it and give it 4.5 stars, plus I've got my fingers crossed that big brother Nate Reynolds gets his spin-off in the near future! ♥