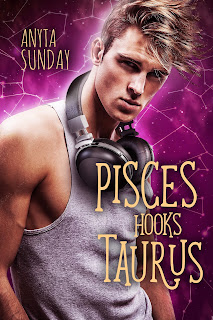 “You're note simple, Zane. You're charming.”

“We all need romance in our lives—know what? You and me? We're gonna be two guy friends who are all about the romance.”


Okay, you know how I named the last full-length Signs of Love novel as my favorite? Yeah, umm... While I remain a proud Capricorn, Pisces Hooks Taurus has laid claim over my heart and is now my favorite book in the bunch! I mean, there wasn't really much of a choice but for me to put this fourth and latest book at the top of my list, what with a charming as hell story about an unlikely bromance evolving almost organically into more between a thirty-year-old associate literature professor and a twenty-three-year-old comic book artist from New Zealand. Labeling this a strangers-to-housemates-to-friends-to-lovers slash opposites-attract romance makes sense, but there's so much more to the love story of Beckett Fisher and Zane Penn and giving it a rubber stamp sort of category or label belies just how extraordinary of read this was. Ironically, at its very core, Anyta Sunday's book is, simply about love.

Zane Penn has spent a fair bit of time traveling to different places around the world, but this Kiwi has decided to put down roots in the town of Redwood--the same place that his older brother now calls home along with his wife and new daughter. The quickest way to do that would require Zane to get married to an American citizen, but he refuses to settle for a marriage of convenience even if he's only got a month left on his visa. Nope, this romantic believes in love and an instant connection during a meet cute with his chosen online date could very well lead to insta-love with his future wife. However, his new housemate doesn't quite share the same sunny outlook Zane has when it comes to love and commitment. Beckett Fisher once thought he had his own happily-ever-after locked up, but his divorce papers remind him that love and romance are very fickle things. Zane, though, wants to show Beckett that romance isn't dead by nurturing a bromance between the two of them. In the weeks that follow, Zane and Beckett grow closer, and it's clear there's an attraction there, but there'd be no point in acting on it, not when there's an end date staring them down. Is there hope of this Piscean hooking his Tauran AND getting to keep him?

Le sigh. This book was everything I needed and wanted for a weekend read. Heck, I would have been more than happy to read any time of the week! Beckett and Zane were very different--the former was an intellectual who loved to read and teach and had his routines and schedules while the latter was an adventurer who brought the stories of writers to life with his drawn images. Oh, and did I forget to mention that Beckett was gay and Zane was straight--at least that's how things are when they first met. I loved the connection these two shared, and that I felt like I was a witness to them starting off as mere strangers and then having their relationship evolve while becoming involved in one another's lives, and not even as romantic partners for a good portion of the book. There's a lot of wit and humor in the story, but there were also moments where I felt my heart clench in empathy for both Beckett and Zane, although more the latter, what with his feeling as if he wasn't worthy to be around and with someone as intelligent and gifted with words as his professor. Another that that had my heart squeezing was Zane's relationship with his older brother Jacob, who was probably the sole anchor in his life prior to meeting Beckett. There were certainly a couple of familiar faces plus a couple of new ones that I couldn't help but be rather curious about and wonder if they were going to be featured in their own books sometime in the future. Maybe that's wishful thinking on my part, but I'm putting it out there for the universe to do with it what it may! This was slow burn at its finest, and one I wouldn't hesitate to recommend. I was hooked on Pisces Hooks Taurus! Five-plus stars. ♥