Release Day: The Boy I Grew Up With by Tijan 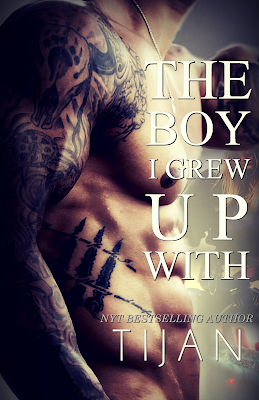 About The Boy I Grew Up With
I have loved Channing Monroe all my life.

In first grade, he asked for my Trapper Keeper.
I hit him in the head with it.
Third grade, we were best friends. We kissed in seventh grade.
Eighth grade, he turned into a bad boy and the rest was a tumultuous storm.

Growing up, the problem was never love for us.
Bad times. Good times. There were times when I felt our love in every inch of my body, vibrating, making me feel like it could bring me back to life.

The problem was us.

The problem is that we’re from two different worlds now.
Fallen Crest and its millionaires for me. Roussou and their criminals for him. I was thriving in mine and he was running his. 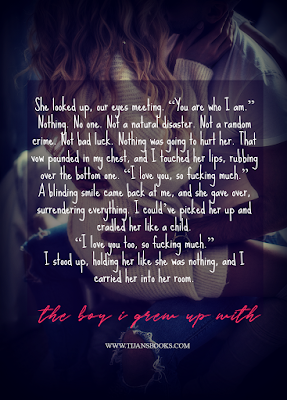 Read my five-plus-starred review of The Boy I Grew Up With.

Add The Boy I Grew Up With on Goodreads. 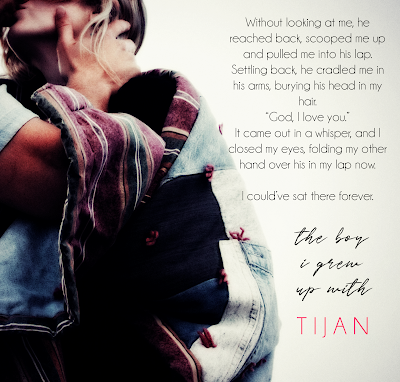 An Excerpt from The Boy I Grew Up With
“What are you doing here?”

His arms tightened a little around me, and his hand rubbed over my leg. I was buck naked in his arms. I should’ve dressed, but I didn’t have the energy.

His breath felt good on my neck as he answered. “I was up with the guys. I missed you.”

Meaning: he’d either been fighting or drinking with the group of guys he considered more family than family.

I lifted one of his hands to inspect the knuckles, rubbing a thumb over them. “They don’t look bruised up.”

His body tensed, all six feet of pure muscle.

Channing had a face for the fashion runways, a body of tattoos that could appear in any magazine, and an attitude that made him a leader among the rowdiest and most criminally inclined. He was whip smart, ruthless, cunning, cocky, and had a charming side that had started some of our fights. He could be too charming at times, putting his name on a lot of girls’ to-do lists. It’d been a problem for us since we were kids, and though it’d gotten better over the last few years, I knew women came onto him regularly.

But being transparent here, that wasn’t the cause of our problems lately.

His voice was quiet. “I wasn’t fighting.”

I turned and tried to smell his breath. There was a slight trace of bourbon, but that might’ve been mine. “You don’t seem drunk either.”

He chuckled, his eyes studying every inch of my face. He did this when he was trying to figure out where I was going with my statements and if that’d take us into a fight. We acted like we were married and in our sixties by now.

His thumb went to my mouth and pressed there, softly. “I really was just hanging out with the guys. Cruz came over, said you closed for him. I gambled, thought maybe you’d be up—or not.” That dimple again. “I was hoping just to slide in next to you.”

I sighed, and his thumb caressed my cheek before his hand returned to my leg. I moved back, resting in his arms again. 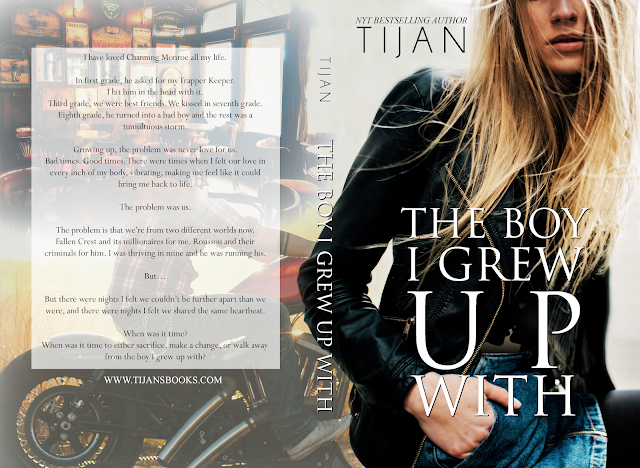 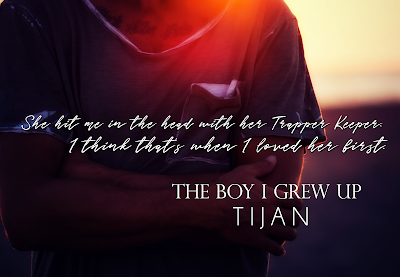