Review: Cards of Love: The Lovers by Fiona Cole 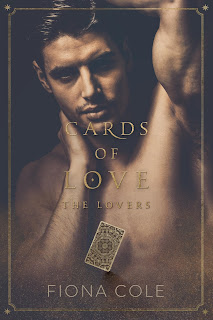 Jake Wellington and Carina Russo went from being the best of friends to engaged to be married, but as in love as Carina may be with her fiancé, she feels as if there's something missing in their relationship. Their professional partnership, however, is unparalleled, which is why they're the marketing team tasked by Wellington and Russo to handle their newest client, Voy, an upscale bar and offshoot of Voyeur, a club known for it exclusivity and secretiveness. When the point person on the client's end turns out to be Jackson Fields, Carina can't help but notice two things: how hot Jackson is and Jake's reaction towards him. Upon learning that Jake and Jackson used to be best friends in college, Carina can't help but wonder what could have happened between them. Another thing she can't help but wonder about is how it would be to have Jackson in the same bed as her and her fiancé. A threesome is one of her fantasies, and this could be exactly what her relationship with Jake needs to spice things up. What she doesn't realize, however, is just how deep the history--and feelings--go between Jake and Jackson...

Oh, hello, Fiona Cole! Where have you been all my reading life?! This author's contribution to the multi-authored Cards of Love collection was my introduction to her writing, and it's clear that I've been missing out because The Lovers was such a fantastic surprise of a read. I've read quite a few books involving three-sided relationships--whether you call them threesomes or throuples--and admittedly, it takes a lot to convince me that all three people involved see each other on equal footing. Cole's take, however, was refreshingly different! She didn't try to make me believe that Jake was as in love with Carina as he was with Jackson nor Jackson with the engaged couple or Carina with the two men. Nope, she's given this MMF romance of hers her own touch of creativity, what with Jake and Jackson sharing a complicated past and Carina being truly in love with Jake. There's no denying that Carina and Jackson are in love with Jake, but Jake's feelings towards the one man he's never forgotten and the woman who's been such a constant post-Jackson are far more complex but nonetheless authentic and meaningful to and for him.

I'll be honest here, I was hoping for the story to end in one particular way, and lo and behold, I got what I wanted! I won't say how everything is resolved because I'm trying to keep this review of mine as spoiler-free as possible, but I was thrilled with how everything played out because some of it I didn't really see coming and the rest more than satisfied the romance reader in me. This book has also made me curious about the author's previous standalone--Voyeur, which was released in April--which is also where Jackson's character was introduced. I added it to my never-ending to-be-read list as soon as I was done reading The Lovers. I'm also looking forward to seeing what the author has planned for the noteworthy supporting characters that readers met here, particularly, Daniel Witt and Alexander Kent, plus one other character who shall remain nameless for, well, certain reasons. Obviously, Fiona Cole has left me more than impressed with this latest release of hers, and if her back list and future work are, at the very least, at par with The Lovers, then I could very well become a fan of hers. I'm giving The Lovers five stars. ♥

Purchase Cards of Love: The Lovers on Amazon.