Review: The Day I Stopped Falling for Jerks by Max Monroe (Jerk #1) 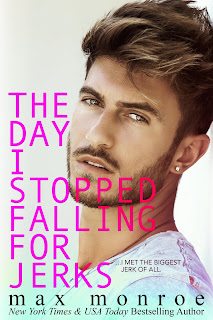 I'm familiar with the name "Max Monroe" but I'd never read anything written by them until The Day I Stopped Falling for Jerks, the first in their Jerk duet. I didn't even have any clue that Max Monroe was compose of two people! Yep, that's how clueless I was. The one thing I did know was that their books have received mostly positive reviews on e-retailers and sites like Goodreads, so when an opportunity to read something of theirs came along, it wasn't too much of a risk, plus this would give me the chance to see if all the hullabaloo was warranted. And yep, it was all totally warranted, and now I'm kicking myself for not reading more of their books from the very beginning!

The Day I Stopped Falling for Jerks has three things going for it: the writing, the main characters, and the story. We've got ourselves a twenty-seven-year-old woman named Luciana Wright who may have been given the nickname "Lucky" but finds herself absolutely out of luck when it comes to dating, having met more jerks than she thought possible. She shares her tales of woe via a podcast series, which was a foreign concept to her given that she was an in-house writer for Scoop and was more used to putting her words down on paper rather than speaking them into a mic for whomever out there to hear. When she meets her best friend's brother--thirty-seven-year-old Oliver Arsen--she notes his hot Aussie accent and his hotter surfer bod, but Ollie may be the jerkiest jerk of them all. Falling for him would lead to another tale of woe...or could Ollie surprise Lucky into more of a "whoa" instead?

It shouldn't really surprise anyone that this book ends in an evil cliffhanger, but here's the thing: the conclusion to the duet releases next week, so it isn't too terrible of a wait. I don't want to go into too much detail, but what I will say is that Lucky and Ollie--whose name I adore because my dog, whom I consider my baby boy, is named Oliver and his nickname is Ollie too!--have a hell of a lot of chemistry and these two were absolutely entertaining from the moment they meet until...well, they get to the end of the book. I loved that the authors chose to write Lucky and Ollie's story in the format that they did because it certainly was something creative and fresh since this was the first time I'd ever read a novel like this. Color me impressed! The Day I Stopped Falling for Jerks gets five stars. ♥

Purchase The Day I Stopped Falling for Jerks on Amazon.