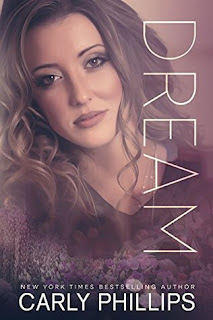 Ah, the Rosewood Bay series is definitely one of my favorites from Carly Phillips. I loved reading every single one of the books, each one standing out in its own right. The fact that the covers all had just women in front definitely earns kudos from me, especially since these were all stories about women finding the courage to start their lives over and seeing that they're more than worthy of love. The series closes out with the fourth novel, Dream, and it's the tale of two former best friends who have a second chance to become friends yet again...and maybe even more.

Andrea Harmon and Kyle Davenport were the very best of friends for years, but when Andi rejected his friendship and pushed him away right after high school graduation, it takes years before they see each other again. This time around, Andi is a single mom to eight-year-old Nicky and works at the local flower shop. Kyle returns to Rosewood Bay after his mother suffers an accident and he decides he'd rather be close to his parents and brother. It turns out that Kyle is none other than Nicky's new teacher, but as much affection as he shows her son, the reception Andi receives is frosty at best. But how can she explain that she had no other choice but to do what she did years ago? Will Kyle be able to forget years of hurt and admit he still loves Andi and can they have a future if her past returns?

I know this is going to sound really weird, but I was actually glad that Kyle wasn't fawning all over Andi when they saw each other again to talk about Nicky at the beginning of the book. It emphasized that what Andi did to him really did scar him emotionally and that it was going to take some effort to bridge the gap between them. Andi's need for independence was admirable, but I applauded her for also recognizing that she wasn't alone this time around--that she had family and friends to support her should her abusive ex make a return. I liked that Kyle wasn't this overly alpha sort of male and that he more than recognized Andi's needs and wants. He was also one of several strong male figures in Nicky's life, but he wasn't this overly domineering sort thinking that he knew best all the time. Having the three other couples there as well gave this series ender a full circle moment, and I enjoyed seeing where they were in their respective relationships. I'm so going to miss this series! Dream receives five stars. ♥