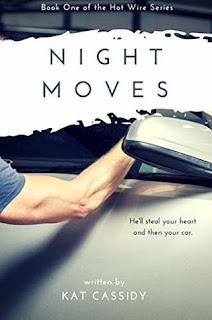 Night Moves introduces readers to Peter Bauer, head of his father's night crew--a group dedicated to stealing vehicles of particular makes and models. The rush he gets when he hot-wires a car is unlike any other, but while he usually acquiesces to the demands of his tyrannical parent and boss, he simply couldn't resist going after one particular '65 Shelby Cobra. He earns his father's disappointment once again, and he's left cleaning up the mess, only this time, he's got help in the form of Nikos Petrakis, a mechanic working out of the elder Bauer's garage but who dreams of opening his own one day. Peter and Nik are brought together by circumstance, but the ties that bind them are far more complicated than they may seem. Will they be able to outrun their respective pasts in order to have a true shot at a life of freedom beyond what's kept them cuffed too long before everything unravels?

Would it sound weird if I admitted that I feel proud when a debut author leaves me highly impressed with their first foray in the world of published fiction? It’s a rare feat, and Kat Cassidy is one of the rarefied few to do so. When I saw she was offering up her book to be read and reviewed, the blurb had me hooked, and suffice it to say, her story and writing had my full attention from the get-go. It sounded like an ambitious story to write, but Cassidy did quite nicely, coming up with a good mix of romance and suspense. Even better, Night Moves is the first in her brand-new series. Out of a handful of debut releases I’ve had the privilege of reading this year, this book, by far, has left a lasting impression on me, one that’ll hopefully carry me over until the next release in the Hot Wire series. I've got my fingers crossed that this wasn't just a fluke--and yes, my expectations for book two are high. Five stars. ♥