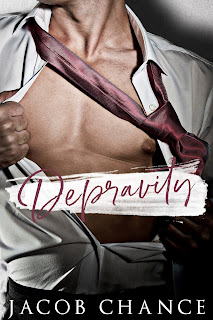 The multi-authored trilogy called King University starts off with Depravity, a May-December and professor-student romance penned by Jacob Chance. Thirty-three-year-old Miles Decker is a single father who has sole custody of his two-year-old son, Joey, and works as a professor at King University. In need of a babysitter for Joey during the day, Miles's sister recommends her student employee from the library--nineteen-year-old Sophie Gardner. She and Joey click right away, and as much as Miles wishes he didn't notice how beautiful on the outside and inside she is, he's drawn to Sophie as well. His ex-wife's betrayal has made him distrustful and distant, but there comes a point where he can no longer deny his attraction to his son's babysitter. But what they share can only last over the summer because Sophie is leaving for college and the last thing she needs is to be saddled by a relationship that neither of them are ready for. Parting ways is far more difficult than either of them could have ever realized, but this was what was best for everyone concerned. But fate has other plans once Sophie enter Professor Decker's classroom...

From the moment I started reading this book, I had a feeling it was going to be different from the usual "taboo" romance involving older single fathers and younger babysitters. I appreciated that there wasn't this immediate lusting after each other that happened between them. If anything, I liked that they stumbled at times and struggled to find some sort of common ground, which of course, happened to be Joey. A lot of times, books with this sort of theme have an overabundance of sex. Don't get me wrong; I'm all for sex and lots of it, but too much of a good thing makes it bad, and thankfully, this book wasn't all about sex. I actually appreciated that the author wrote this well-conceived story that really was about two seemingly unlikely people who don't expect to find love but ultimately do yet obstacles are all around them. I'm not going to say what happens in the book--other than what's mentioned in the blurb, of course--but rest assured that this does end quite happily. Jacob Chance has done well with this new series starter, setting bar high for the next two books still to come. Depravity receives 4.5 stars. ♥