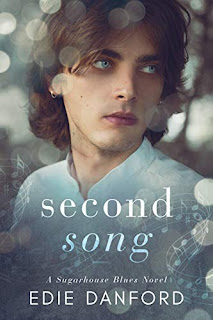 Second Song is the first novel in Edie Danford's new Sugarhouse Blues series, and it was such a wondrous way to re-introduce myself to this author's writing since it's been about a year since I last read something of hers. This was such a beautifully written story about two men touched by the same terrible tragedy and how their lives have changed and become intertwined even further after they finally meet face to face. There is NO cliffhanger to be found here, what with this series starter having one couple and the next book having a different couple, although at least one of the main characters--that I know of--for that second book is a peripheral character in this first book.

Sage Hazen was nineteen and touring the world, sharing his voice and music with fans who were attending his concerts, when he was brutally attacked and abducted by a stalker, leaving his bodyguard, Marco Callan, dead and Sage's voice permanently damaged. Four years have passed, and now Sage has decided to take the second phase of his career public and needs security. This time around, it comes in the form of thirty-two-year-old Antonio Callan, his late bodyguard's younger brother. For seventeen days, Antonio will watch over Sage and keep him safe, but it doesn't take that long for the connection between them to come to life and for either of them to fall in love. However, while Antonio may be able to protect Sage from harm, can he save them both from possible heartbreak?

Sigh. I had a major book hangover when I was done reading this novel, and it was a reminder of why I first fell in love with Edie Danford's writing a couple or so years ago. There's this lovely lyricism to her writing here and her gift makes it so easy for a reader to picture the setting or the moment so vividly in their head. There is a great deal of angst in the story, but there are also countless lighthearted, witty moments to balance everything out quite nicely. Sage and Antonio share an attraction to each other that's notable, but it quickly goes beyond that, yet this was a slow burn romance, one that may test the patience of some but I appreciated the direction the story took, choosing instead for both men to truly weigh their feelings for each other before taking the brave step to pursue it. Second Song was a novel about love and family and finding the courage to make life-changing decisions. Five stars. ♥