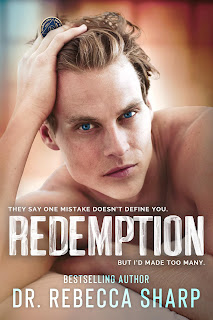 Redemption is a companion novel to Reputation, both books having been penned by Dr. Rebecca Sharp. This also marks my fourth read from the author. I read Reputation right before starting this new release because the main character in Redemption is a peripheral character in that previous book. Here's the thing, though: I wasn't a fan of book one, and I struggled getting through it, so I may have been a wee bit nervous about this companion read. Fortunately, this was a far smoother reading experience, and I appreciated seeing how much the main character evolved from who he was in the book featuring his sister and his best friend to who he is as he seeks redemption.

Ashton Tyler is a man with demons, and he realized almost too late the need to vanquish every single one of them. Redemption to him meant cutting ties, and not just with everything he was addicted to. He left the life he was drowning in behind and distanced himself in hopes to start over. And then his past came knocking on his door in the form of his sister's best friend, Taylor Hastings. She's seeking much needed refuge, and she hasn't come alone. There was no way Ash could have turned her away, and not simply because she was in the state she was in. Taylor clearly had her secrets and she wasn't ready to share them with Ash, until they share one kiss that changes them.

This was a really angsty read, and since I'm a bit of an angst addict, I was all for it. I think that having seen how Ash was before and seeing how he is now gave me a better appreciation for his transformation. There was a whole lot about him in Reputation that made him seriously unlikable, but talk about a metamorphosis of sorts. As much as I didn't like Ash in the previous book, he lived up to the title of this book, ultimately redeeming himself. As far as Taylor is concerned, I confess that there was a disconnect for majority of the book because I found her overly frustrating, but she did manage to win me over. The author did a really admirable job with Redemption. Four stars. ♥