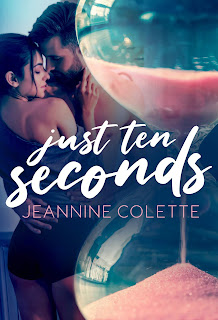 Time stops when you're in love.

There is no hourglass spilling the seconds.

The looks are long; heartbeats are quick.

A touch lingers for a lifetime.

And the feeling is something rests in your heart forever.

Time is, indeed, something that can be measured, whether it be in hours, minutes, or seconds. What happens during a period of time, however, well, the effects can prove to be far more immeasurable. In Jeannine Colette's new novel, one woman's life has changed time and again, but all it takes is just ten seconds for it to be altered in ways she never expected. Just Ten Seconds is the story of twenty-nine-year-old Mara Williams, and she's moved to a small town where no one knows her name. She's starting over, considering this new place a respite of sorts. She's more than familiar with how it is to leave your dreams behind. She's done it more than once, and now, she needs to do it again in hopes of finding some semblance of peace. But when she makes the conscious choice to participate in a bereavement group rather that the group she usually goes to, she doesn't anticipate meeting the man who will set her life on a whole new course, one she hadn't quite planned for. Within the first ten seconds of being in his presence, Mara is ensnared within thirty-four-year-old Dean Delgado's orbit. As their story unfolds, they fall for each other, but will their relationship survive when the widower and single father discovers the truth?

The blurb for this novel merely scrapes at the story that it shares with readers. Jeannine Colette has ingeniously weaved the various elements of Mara and Dean's love story without needlessly pandering to her fans and readers. Yes, Mara knowingly omits the truth of her circumstances when she joins the bereavement group, but when you learn her personal history, you realize that she has experienced her own grief over the years. Now, a lie is a lie, whether it be out of omission or otherwise, but then that's part of what makes this such a fascinating read. After the evolution of their relationship, when--and yes, it's when and not if--Dean learns that part of the foundation of said relationship is a lie, what happens next? Does everything come to a screeching halt and will that halt be permanent or a temporary pause? With as many book as I've read, I had a feeling I knew which path the story would take...HOWEVER, the side roads Colette chose to take our characters on proved to be a very welcome surprise. I've always said that I have a great deal of admiration for authors that pave their outcome of their stories their own way, and that was definitely the case with this truly gifted author. It may take more than a handful of seconds to read this beautifully written story about loss, love, and second chances, but it stays with you past "the end". I highly recommend Just Ten Seconds--make sure to get the free bonus epilogue!--and it gets five-plus stars! ♥