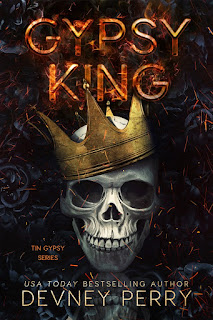 Somewhere between the time he'd fixed the Goss printer and folded my towels, Dash had slipped into my heart.

Could I get over his criminal past? Could I forget that he'd done violent, vicious things I could barely fathom? Yes.

Because he wasn't that man anymore. Not to me.

Don't you just love it when an author can keep you on your toes and gives you a story that takes you by surprise in the best ways possible? Devney Perry does exactly that with her opening salvo in her new Tin Gypsy series, which is a spin-off of her debut series, Jamison Valley, specifically the second novel, The Clover Chapel. Sadly, I've yet to read the first five books in that particular series--although I do have them sitting prettily in my tablet--but I was able to fully enjoy this new novel without feeling lost in the least. My curiosity's been piqued, though, so I'll be moving those books up on my to-be-read list during the holidays, which is when I'll finally have more free time to do nothing more than read and read and, well, read some more. But I digress. Gypsy King welcomes readers to the world of an infamous motorcycle club that has ceased to exist but whose legacy continues to haunt a chosen few.

The decision to leave her job in television in Seattle behind was a long time coming for Bryce Ryan. At thirty-five, she'd already wasted more years than necessary doing something that no longer brought her joy. Now, she's back as part owner of the Clifton Forge Tribune alongside her semi-retired journalist turned publisher father. Living in a small town like Clifton Forge, Montana, however, doesn't exactly get her investigative juices flowing. Sure, birth announcements and town milestones are great and all, but she needs something more substantial--more intriguing--and she's got her sights set on the Tin Gypsy MC. The club may have already closed its proverbial doors, but Bryce feels there's more to the story than what's out there. So when the former club president becomes the lone suspect in a vicious murder, Bryce knows this is her shot and she's going to take it. Nothing is going to get in her way--not even the man's thirty-five-year-old son and the last president of Tin Gypsy, Kingston "Dash" Slater. He claims his father isn't guilty, but evidence says otherwise. Could there be more to this story than meets the eye?

From the moment a woman's body is discovered and all fingers point at Draven Slater, Bryce Ryan and Dash Slater are on opposing sides, and there isn't any sort of easy nor quick flipping around of beliefs for these two. We all know about insta-love in books, but with Bryce and Dash, it was insta-hate and then some--the "some" being a thrumming of lustful attraction between them that neither one was prepared to act on right away. I loved how intense their connection was and that made for delicious tension, like you're just waiting to see who would pounce first in each new round of face-offs they would have. Aside from the sex and romance, however, this series starter also happened to have a top-notch story line involving a murder mystery, and damn if I wasn't stumped as to who was behind it all. Aside from that, the supporting cast of characters have me curious as to what stories they had to share. I need more from Tin Gypsy as soon as possible! Well done, Devney Perry. Five-plus stars go to Gypsy King. ♥