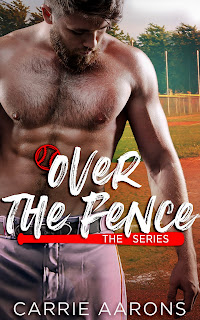 Carrie Aarons has compiled her three full-length Over the Fence novels into one box set and has included a new novella for the fourth baseball-playing friend to round out the series nicely. I love how this box set has allowed me to finally work my way through Aarons's back list, and I've always enjoyed sports romances in general and hers in particular. I've read her books that have gymnastics and football as their chosen sports, and now, it's all about what's considered as America's favorite pastime, baseball, with books one to three--all full-length novels--focused on college baseball and the new fourth book--which is novella in length--turning its focus on professional baseball.

All four novels had fair doses of angst--which naturally makes the angst addict in me a very happy camper, especially since nothing was overly done or thrown in just for the sake of stirring up drama--what with one or both of the main characters dealing with issue brought about by their past or something ongoing. I appreciated the fact that the series had four different stories to tell, which isn't always an easy feat since I have come across several series that basically had the same story line with maybe a one or two things that have been changed. For this particular box set, I was able to enjoy four distinctly different tales and four equally different sets of main couples.

Among the four, I'd have to say that the novella, Fielding to Win, is my favorite (thanks to strong main characters who share somewhat similar pasts that continue to haunt them), and it takes place about five years after the events in the third novel, Catching to Win, which was my least favorite (no thanks to the heroine, even though the hero was a sweetheart who deserved better). The first book, Pitching to Win, was a good start and the second one, Hitting to Win, was definitely a great follow-up, with both having fantastic couples who grew quite a bit as their stories unfolded. So, having taken all the stories into consideration, I'm giving the Over the Fence Box Set four stars. ♥

Purchase Over the Fence on Amazon.