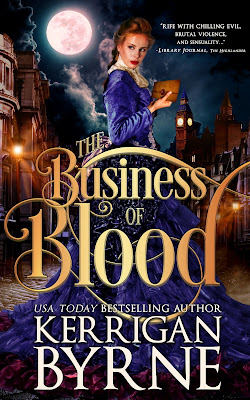 About The Business of Blood
London, 1890. Blood and death are Fiona Mahoney’s trade, and business, as they say, is booming.

Dying is the only thing people do with any regularity, and Fiona makes her indecorous living cleaning up after the corpses are carted away. Her childhood best friend, Mary, was the last known victim of Jack the Ripper. It’s been two years since Fiona scrubbed Mary’s blood from the floorboards, and London is no longer buzzing about the Ripper, but Fiona hasn’t forgotten. She hasn’t stopped searching for Jack.

When she’s called to a murder in the middle of the night, Fiona finds a victim mutilated in an eerily similar fashion to those of the Ripper, and only a few doors down from Mary’s old home. The relentless and irritatingly handsome Inspector Grayson Croft warns her away from the case. She might have listened, if she hadn’t found a clue in the blood. A clue that will lead her down a path from which there is no return.

As a killer cuts a devastating swath through London, a letter written in blood arrives at her door, and it is only then that Fiona realizes just how perilous her endeavor is. For she has drawn the attention of an obsessive evil, and is no longer the hunter, but the prey.

Fiona Mahoney is in the business of blood. But she’s not the only one.

With intriguing twists, blood-chilling discoveries, and dazzling prose, USA Today bestselling author Kerrigan Byrne shows that a woman’s work is never done, even when is sleuthing out a serial killer.

Read my 4.5-starred review of The Business of Blood.

Add The Business of Blood on Goodreads.

An Excerpt from The Business of Blood
Aidan stood behind me for a moment, motionless and silent. I could hear every word ever spoken and unspoken between us spilling onto the ground at my back.

“I understand what the years have done to you, Fiona. I know all the reasons you do what you do.” The pity in his voice summoned a scream from deep, deep in my soul, and I swallowed three times to keep it from escaping. “I appreciate that you have to be cold sometimes. But have a care this profession of yours doesn’t make you heartless.”

Struck by an idea, I frantically searched until I found Frank Sawyer’s heart in the center of the basin. An unceasingly strong muscle upon which one’s entire existence depended. I counted four chambers. Four valves. I stared hard, unblinking in the wan light until Aidan’s retreating footsteps plodded away.

Every single part of her had been catalogued in all its exposed and grotesque exactitude. But not her heart. The Ripper had taken that, along with her life.

I searched for the palpitations to prove Aidan wrong and found them, faint and fluttering, against my rib cage. I still had a heart, even though he owned pieces of it. And yet, I’d stood over too many corpses of those I loved, each time expecting my bleeding heart to just…stop. It should, I think. When a heart was broken as many times as mine, it shouldn’t work anymore. But somehow, it still did. It kept going.

And so long as it beat in its chamber, I’d search for the Ripper. 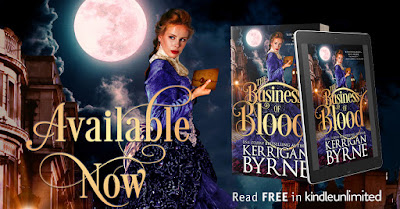 About Kerrigan Byrne
Kerrigan Byrne has done many things to pay the bills, from law enforcement to belly dance instructor. Now she’s finally able to have the career she’d decided upon at thirteen when she announced to her very skeptical family that she was going to “grow up to be a romance novelist.” Whether she’s writing about Celtic Druids, Victorian bad boys, or brash Irish FBI Agents, Kerrigan uses her borderline-obsessive passion for history, her extensive Celtic ancestry, and her love of Shakespeare in almost every story.
She lives in a little Victorian coast town on the Olympic Peninsula in Washington State with her wonderful husband. When she’s not writing you can find her sailing, beach combing, kayaking, visiting wineries, breweries, and restaurants with friends, and hiking…okay…wandering aimlessly clenching bear spray in the mountains.