Review: Taming My Whiskey by Melissa Foster (The Whiskeys #6) 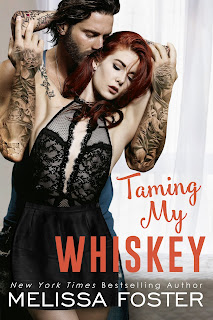 I've adored Melissa Foster's Whiskeys series from the first book onwards, and because I've been a reader of the stories since the beginning, I have no qualms admitting that I've been eagerly awaiting Dixie Whiskey's story, wondering who would be able to tame her rebellious nature. Well, it looks like the answer to that query was just a Stone's throw away. See what I there? No? Okay, I was trying to be all witty, but for the sake of those who have yet to read the book, Dixie is paired here with Jace Stone. So, how do the princess of the Dark Knights motorcycle club and the co-owner of Silver-Stone Cycles make their way towards their happily-ever-after? Definitely not so easily...

Dixie Whiskey may be an MC princess but she's not waiting on any sort of prince to charm his way into her life. She's her own person and needs no man to complete her, thank you very much. That doesn't mean, however, that she isn't interested her own happily-ever-after, especially after she's seeing her brothers finding love. She's had her eye on someone, but nothing could ever come of it. Not if Jace Stone has something to say about it. He's resisted acting on his attraction towards Dixie in the past, but maybe the time has come for him to show them both what they have been missing. Can a man who doesn't do relationships convince a woman who does to take a chance?

I absolutely loved the push and pull between Dixie and Jace, especially given how stubborn these two could be. She gave him a run for his money, but this wasn't about her playing hard to get. I mean, it isn't easy handing your heart over to someone and run the very real risk of getting it broken since he didn't believe in commitment. But the connection was so undeniable with these two and with the bickering and bantering, they were really hot as a couple. I know this book has been touted as a standalone, but recognizing the other characters from the series made for a more satisfying read, which is why I recommend you check them out. Five stars for Taming My Whiskey. ♥