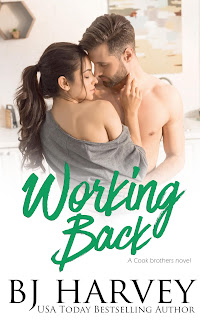 “I knew the first time I saw you again that this was the chance I'd been waiting the last twelve years for, and that I would do absolutely everything in my power to make sure you'd never wanna leave again. What I didn't count on was it being the easiest fight of my life because every step of the way, you've been right there with me.”

“You'd already won me the day I met you,” I whisper, loving the way his gaze turns soft.


I FLOVE this series!!! From the first book to this third one, I've found myself absolutely smitten each and every single time, and I suspect it'll simply be the same with the upcoming fourth one...and maybe another one for a "brother" not by blood but by choice and ties? But I digress. Let's focus on this current and newest Cook Brothers novel, Working Back, which is a second-chance love story between thirty-four-year-olds Bryant Cook and Faith Baker. At the age of eight, they became the best of friends, and over the years, that friendship blossomed into the sort of love that both Bryant and Faith believed was everlasting. But when they were both twenty-two, Faith not only rejected Bryant's marriage proposal but left him, their families, and the life they shared behind, flying to Australia and staying there for the next twelve years. Her decision to return leaves her anxious about the reception she'll receive from the only man she's ever loved. She wants nothing more than to prove she's back to stay. Faith expected disbelief and distrust from Bryant; what she didn't expect was for him to utter two life-changing words...

When it comes to second chance romance reads, my cynical romantic self can oftentimes decide to go their separate ways, which basically means that there are times, the cynical part of me will read a book and feel that the main twosome should have remained apart, and then there are moments where the romantic in me will be shipping a rekindling of feelings. In the case of Bryant and Faith, I admit that I may have been a wee bit wary of Faith, but just like she did with Bryant, she more than won me over. One of my favorite things about this book was the fact that even though it was clear that these two still loved each other even after a dozen years apart, they still had to find their footing in their relationship. The connection remained all this time, but it was frayed because trust had to be re-earned and letting go of the fear of abandonment and rejection is far easier said than done. But see, Bryant and Faith had the sort of love that didn't just deserve a second chance--it deserved forever. Again, family plays a huge part in the story, but I'll leave it for readers to experience once you read Working Back. Five-plus stars! ♥

Working Back (book three) - five-plus stars - My Review (posted above)