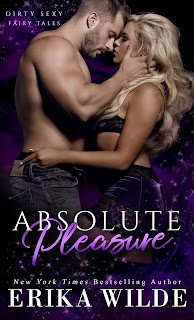 Absolute Pleasure is the second book in Erika Wilde's Dirty Sexy Fairy Tales series, and this time around, she's taken on Cinderella. Hunter Wilder is a man who is more familiar with loss than he would like to be, having lost his parents at a young age and then his fiancée just four years ago. He's never had a connection with a woman the way he did with the woman he loved, so when he's immediately taken by the gorgeous woman who catches his eye during his family's charity ball, he's taken aback. While Elaina Darian was invited, her stepmother pointedly excluded her from the RSVP, choosing instead to only write down her name and Elaina's two stepsisters. However, Hunter insists that she be allowed into the ball as his personal guest. He promises her one night of absolute pleasure, and she eagerly accepts, but neither one of them could have anticipated how life-changing that single night would be. So, what's a man to do when the woman who rocked his world flees his home without a word or a way for him to contact her, leaving one shoe behind? Why, go on a quest to find his wayward Cinderella, of course!

The first seven or eight chapters take place in the same time frame as the events in the first book, Total Surrender, but what we get in this second book is fresh material, so they're two completely different novels that can be read independently of each other or in order--your choice. This does have major Cinderella feels, thanks to the evil stepmother and then two stepsisters, although one isn't really as bad as the other. The whole sleeping in the maid's quarters may have been pushing it a wee bit, especially since I had already been wishing I could give Elle a serious talking to because she was far too nice to her stepmother and stepsisters. On the other hand, it was nice seeing her develop as a character, and the same goes for Hunter, although I was hoping for his character to be fleshed out far more. As far as the story goes, it was fast paced and the steamy moments between Hunter and Elle were scorchingly hot. The twist on how Elle handles her step-family was a good one, and the ending had that perfect touch for a couple like Elle and Hunter. Absolute Pleasure was, indeed, a pleasure to read. It gets four stars. ♥