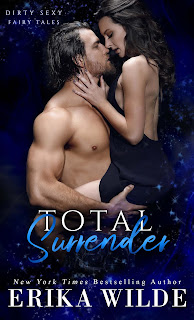 Total Surrender is the first book in the Dirty Sexy Fairy Tales series penned by bestselling author Erika Wilde. This is, as the series title clues you in, a dirtier, sexier take on a fairy tale, specifically Beauty and the Beast. At thirty-two, Maddux Wilder has achieved the kind of success that others can only envy, a billionaire who now has only one thing on his mind: revenge, and it's been fourteen years coming. He's got his sights set on Theodore Cole, the man he and his two younger siblings blame for the deaths of their parents. He had his plan in place, but he wasn't prepared for Arabella Cole, Theodore's twenty-five-year-old daughter and only child. She sacrifices herself in exchange for her father's freedom, binding herself to Maddux, the man who's just threatened her father--the same man she was utterly beguiled by before everything fell apart. She knows she's at his mercy, but while she loathes him, she can't quite deny the feelings and desires he stirs within her. Maddux knows that Bella is an innocent victim in his quest for vengeance, but how far is he willing to go in order to win before he loses his heart to Bella?

Beauty and the Beast is undoubtedly one of the most popular fairy tales that authors choose to give their own modern spin to. Erika Wilde's take on it has Maddux as the Beast, but while he has the physical scars due to what happened to his parents the night they died, the emotional scars left behind by their deaths are what have led him into becoming a beast. Arabella has the expected nickname of Bella, which means "beautiful", and she's the quintessential Beauty--with an air of innocence and naivete that belies the courage and strength that we see an inkling of when she puts herself between Maddux and her father's fate. Just like the Beast in the fairy tale, of course, Maddux isn't an evil villain. You see bits and pieces of the man who's love and loyalty to the memory of his beloved parents and to his two siblings, Hunter and Tempest, with a softer side. The romance was there as was the sex and even a bit of suspense. This book also served as a good starting point for the rest of the Dirty Sexy Fairy Tales series, stirring up interest for Maddux's brother, Hunter, and sister, Tempest. Total Surrender snags four stars. ♥