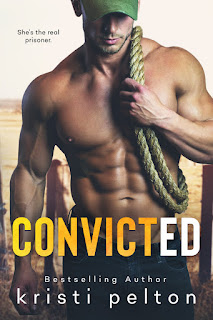 Kristi Pelton is a new-to-me author, and my very first read from her certainly left an impression. Convicted is the story of a twenty-one-year-old young man named Joss Hess who loses the girl he loves, Abby Whitman, and allows his anger to get the better of him, leading to getting arrested. After pleading guilty to the crime of aggravated battery, Joss is surprised to find himself being sentenced to eighteen months at a work release program at Briscoe Ranch. The owner, Cal Briscoe, seems to be kind and generous, but he makes clear what his expectations of Joss are: work hard, be respectful, watch your manners, and take your responsibilities seriously. Failure to do so will result in Joss being taken to the penitentiary where he would serve the rest of his sentence. He's already got his oldest brother, Jake, in prison, and the last thing he wants is to be a disappointment to his older brother, Braxton. So, he needs to keep his head down and do what's expected of him at the ranch, but then Cal Briscoe's seventeen-year-old daughter returns home for the summer, and Ren Briscoe could very well cost Joss his sanity and freedom.

This was a surprise of a read, not just in terms of the direction the story went and the twists that were lying in weight, but also with the author's writing style. This wasn't your typical one- or two-person point-of-view type of storytelling; instead, Kristi Pelton had several POVs to offer up: from the main characters, Joss and Ren, to his brother Braxton, Ren's father, Cal, and even the ranch's housekeeper, Keyona. Most of the chapters are told from either Joss's or Ren's POV, although more the former than the latter, but the insertions of other POVs was an interesting touch and done when appropriate, so no issues regarding that. With Joss and Ren not getting off to the greatest of starts, I loved seeing how their relationship evolved over time, becoming more comfortable with each other and gaining the other's trust and respect. I mentioned that there were twists in this story, and there was one major twist that stood out most. Naturally, I can't specifically say it was, but it brought Joss's story full circle, at least as far as I was concerned. Convicted was a 4.5-star first read from this author and certainly won't be the last. ♥