Review: The Guy on the Right by Kate Stewart 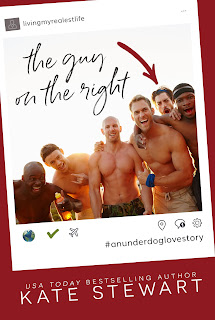 How did I not see this? How could I have not seen this incredible man for what he is? In a matter of life-altering hours, Theo has just become the most irresistible man I've ever known. If I'm completely honest, I've been falling for him, in pieces, since the night we met. And for the first time since we started the relationship, I'm unsure if I'm worthy of such a gift. The gift of knowing him, of seeing him this way, of being on this side of his affection.

I might've fallen slowly, but I just landed impossibly deep.

After back to back (to back!) reads that were heavier in tone and sated my need for angst, Kate Stewart's latest standalone love story was exactly what I needed. This was like a literary palate cleanser and it was one that I couldn't get enough of. Hell, The Guy on the Right was more full-course meal, and boy, was it absolutely scrumptious. This had all those wonderfully delightful romantic comedy feels but it was also so much more than that. With a fabulous combination of wit and humor and a whole lot of heart, Stewart has penned the sort of romance read that warms your heart while tugging on its strings and tickling your funny bone without being irreverent. Think strangers-to-friends-to-lovers where a perceived underdog turns out to be the absolute top dog.

Being named after a cartoon chipmunk was already a point against him, but Theodore Houseman thinks he's finally found a girl that wants him for him, and not because he happens to be roommates with Troy Jenner, football star and the guy every girl is lusting over. But Laney Cox isn't like every other girl. They become friends and the connection they share is undeniable. But then Troy finally notices her, and he's got his sights set on Laney. After all, the jock always wins over the geek, right? However, this time around, Theo refuses to be thrown to the wayside for his far hotter roomie. Laney is meant to be in his life as his "more", and underestimating Theo would be a mistake.

I loved this book, and it hooked me from the moment Theo is introduced and he shares his ongoing texting conversation with us. How the heck could anyone resist the guy?! But hey, I've always personally preferred the geeky guy that's usually relegated to the friend zone over the alpha who thinks he's God's gift to the universe. Yep, Clark Kent over Superman, folks. Theo isn't perfect but he's perfect for Laney, and I adored this girl and her gusto. These two had an honest-to-goodness friendship flourishing between them, and that right there--the development of their relationship into friends and then even more--was what I loved best about this book. Getting to know them allowed me to have this affection for them as well, and that meant me becoming emotionally invested in their happily ever after. This does end happily plus there's a novella in the offing! Five-plus stars to The Guy on the Right. ♥

Purchase The Guy on the Right on Amazon.