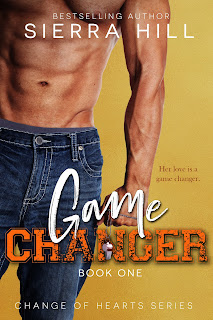 Game Changer is the first novel in Sierra Hill's Change of Hearts series, and it's the story of an almost-thirty-year-old widower and single father to a four-year-old with special needs and a twenty-three-year-old graduate student who becomes their live-in nanny for the summer. The series is a spin-off of the Courting Love series--formerly known as The Sweetest Thing series--but can safely be read independently of the original series. Trust me, you won't feel lost. I can say that with complete confidence since I've yet to read the previous series, but I've definitely become curious of at least one couple from there, so I'll be adding those books to my never-ending to-be-read list.

Garrett Parker's NBA career came to a screeching halt after losing his wife and dog in a terrible car accident--the same accident which resulted in his son, Caleb, with a traumatic brain injury. Two years on and Garrett's focused on two things only: his players and his son. He doesn't have much time for anything else, and with their longtime nanny having retired, he's in need of a nanny for the summer. Brooklyn Hayes seems very much qualified for the position and was highly recommended by one of his former players, but Garrett never expected to be as drawn to her as he is. She's a godsend to Caleb, and he's quickly falling for her as well, but his past is about to wreak havoc.

What I loved most about this book was Caleb and the interactions he has with his father and his new nanny as well as how the two adults are simply so devoted to this beautiful little boy. Garrett runs hot and cold a lot of the time, and while Brooklyn is very much a woman who strives to put herself first, just like her mother raised her, I confess that there were a couple of points where her actions came off as cold to me. And Garrett's past? Well, that's where all the drama comes in, but this was resolved quietly, much to my surprise since it came into the story like a hurricane. Other than those though, I enjoyed Game Changer and look forward to more from the series. Four stars. ♥