Review: All Boy by Mia Kerick 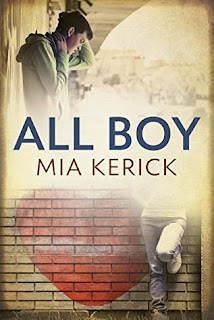 No one does LGBTQIA+ young adult (YA) quite like Mia Kerick does. If you're unfamiliar with her work--and you seriously need to rectify that as soon as humanly possible--diving into her latest standalone release could give you an inkling of just how adept she is with this genre. All Boy is the story of two teenagers who simply want to remain under the radar, hoping to not attract unwanted attention that could likely make them a target in the prep school they attend. Being at Beaufort Hills Academy was supposed to be the second chance Callie Canter and Jayden Morrissey were desperate for. Callie was publicly humiliated by her now-ex-boyfriend, and the last thing she needs is to be the laughingstock of her new set of peers. Being accepted by them is the right way to go and following their cues is what she needs in order to make it till graduation. Then she meets Jayden and becoming friends with someone who's already deemed an outsider would be social suicide. Jayden has his own secrets and leaving his former life behind was supposed to be his shot at starting over as a transman, but the heart wants what it wants. Callie and Jayden are falling for each other, but when all secrets are revealed, will everything they share fall apart?

You know how I know a book is extraordinary? When it resonates with me regardless of the "audience" it's initially supposed to appeal to. I'm happily in my mid-forties, but even though the main characters in this Mia Kerick's newest novel are teenagers, their story--from their struggles to their triumphs--resonated with me. See, that's the thing. We all have issues we try to manage and things and people we cope with regardless of how old we may be. I  may have a grasp on Callie's issues with body image because of my own weight issues, but I don't have to be trans in order to empathize with Jayden. So, to witness these two young people try to find their footing and have their missteps along the way gave this such a relatable quality. Kerick doesn't sugarcoat, which is why my heart clenched painfully in my chest for Callie and Jayden; however, just like in her past work that I've had the privilege of already reading, the author never skimps on hope, inspiring readers by reminding that things do get better and that being who you are and accepting yourself wholeheartedly are necessary steps in the process. Every time I read Kerick's latest work, I encourage readers to experience it for themselves. Consider this my reminder. Five stars for All Boy. ♥

Purchase All Boy on Amazon.