Review: Making Up by Helena Hunting (Shacking Up #4) 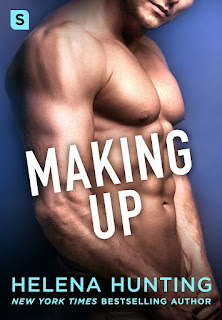 “I love you, Cosy Felton, and I don't want to spend another day without you.”

“I love you back, Griffin Mills, so much, even though you have zero game.”

“I'd rather have you than game.”


I've been REALLY hoping Griffin Mills would get his own book ever since the eldest Mills brother made his presence known in the Shacking Up series. Did it matter that he was engaged to someone? Nope, not when I felt deep down in my bones that he was meant to be with someone else. Weird, and maybe even a tad creepy, but the more I got to know the three brothers--Griffin, Bancroft, and Lexington, aka Griff, Bane, and Lex--the more invested I became in each of them finding love and getting happy endings. With Bane married to Ruby (Scott) and Lex engaged to Amie (Amalie Whitfield)--heck, even Pierce, Amie's brother, has found forever with Rian (Sutter)--it's time for Griffin to get his groove on. Who would've thought Mr. Numbers would find "the one" in a Vegas adult toy store?

With a four-year relationship and expected engagement over and done with, thirty-three-year-old Griffin Mills is in Las Vegas to check out a prospective investment for the family-owned hotel business. He also happens to be there for a bachelor party and has drawn the short end of the stick, leaving him with the not-so-enviable task of shopping for sexual favors--and by that, I mean sex-themed party favors, you dirty-minded peeps--which is how he ends up at Sex Toy Warehouse. While the vast array of toys leaves him dumbstruck, it's the strikingly beautiful sales associate named Cosy Felton who's left quite an impression. But with an eleven-year age difference, Griff being based in New York, and one too many tidbits unearthed, is there any hope for this fling to turn into forever?

Ah, I have a thing for Helena Hunting's brand of humor, as evidenced by my adoration for her books--but she writes angsty love stories like nobody's business, too!--and mix that in with female main characters who have sass and intelligence and male main characters who love fiercely and protectively, then you'll understand why she's got the following that she does. In Making Up, Cosy Felton is the girl with a dash of wanderlust and the fact that Griffin Mills is no stranger to travelling from country to country and city to city, it almost feels like kismet that these two would fall in love. She was the one that stirred up his more passionate and possessive side and he was the one to inspire her to plant some roots and believe in second (or more) chances. I laughed and I sighed and I simply fell in love with their story. Making Up receives five-plus stars, and expectations are high for the next book in this series! ♥