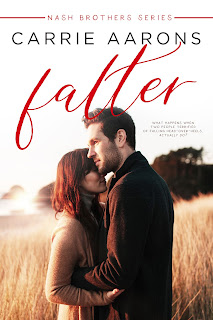 Ryan Shea..she's the type of temptation that I need to avoid at all costs.

She's the type of woman who could make all of those cravings slam right back into my throat.

She's the exact type to become an addiction. And that means talking to her, looking at her, hell...even breathing in her direction.

It's all of limits.


With any series, my hope is for it to get progressively better with each new book that's released, raising the bar every single time. When it gets to the very last one, you want it to be the best in the lot because this tends to be the lasting impression for readers, the one that can wrap everything together, bringing the series and all the main characters full circle. Well, Carrie Aarons, allow me to say that the fourth and final book in your Nash Brothers series was above and beyond anything that I could've hoped for, making Falter my absolute favorite in the series!

Twenty-nine-year-old Fletcher Nash knows all about addiction because he may have spent the past five years recovering, but he will always be an addict. He's proud that he's remained sober for half a decade but the struggle is constant. Then thirty-one-year-old Ryan Shea arrives in his hometown of Fawn Hill. Can the globe-trotting hacker from the city with the broken heart and the small-town recovering artist with the broken soul help heal each other and will those lingering doubts lead their love story to falter? What if "the one" leaves and it all leads to "the end"?

Goodness but how this book broke my heart as Fletcher and Ryan struggled to be free from their respective pasts, but it also mended it as they saw that what didn't break them truly did make them stronger and taught them lessons so that their future together would be forever. Carrie Aarons outdid herself, ensuring that she did this series proud, clearly refusing to rest on her laurels. Fletcher and Ryan fought against their happy ending, that is, until they learned to fight for it, and if any couple deserved an HEA, it was these two. Falter receives five-plus stars. ♥