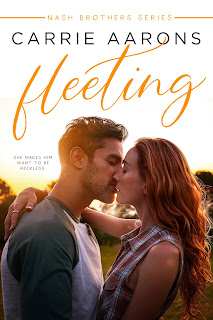 Carrie Aarons has a brand-new series entitled Nash Brothers, and it gets off to a heartwarming start with an opposites attract slash city girl and country guy story set in the small Pennsylvanian town of Fawn Hill. When Keaton Nash took over his father's veterinary practice, he had no idea that he'd lose the man who was his mentor and greatest influence soon after. It's been a couple of years since then, and thirty-year-old Keaton has carried the burden of responsibility with nary a complaint. He keeps his world as orderly as possible and knows what to expect from the community he lives in and the family he loves. Then a twenty-seven-year-old whirlwind of a woman comes into his life and everything begins to shift in his world. Presley McDaniel is the granddaughter of one of Fawn Hill's own, and when she brings in her grandmother's pet dog to see the town vet, she can't quite believe vets as hot as Keaton existed. When he asks her out, she turns him down. She's in town to help her grandmother temporarily, after all. So why is it that the place begins to feel like home and Keaton starts to feel like her forever?

While Fleeting got off to a bit of a slow start for me, by the time we get to the second half of the book, it was definitely hitting its stride and I felt more affection for the female main character--the male main character snagged my attention from the get-go--and I was more invested in their happy ending. I'm a firm believer in the idea that small town romances are only as good as the cast of characters, and this series starter certainly introduced readers to particular townsfolk from Fawn Hill that I REALLY want to get to know better. See, the ideal first in a series of romance standalones--not the continuous kind--for me offers up a story about one couple while giving readers peeks at potential other people who'll get their stories told later on. Here, the series is linked together not just by the town they're in but also by the fact that they're four brothers--Keaton (30), Bowen (28), and twins Forrest and Fletcher (24)--who love their mother and miss their late father. Keaton and Presley's love story made me smile and made my heart twinge a time or two, and Fleeting had a message I loved and left me wanting even more from the town of Fawn Hill, Pennsylvania and Carrie Aarons's Nash Brothers series. 4.5 stars. ♥