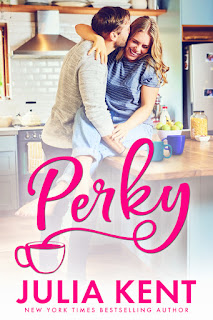 I’m one big contradiction. I am hypocrisy personified.

I am betraying my own dignity as his hands cup my ass but by God, this feels amazing.

I have been itching to read this book from the moment the character of Persephone Tsongas, who prefers to be called Perky, made her presence known in Julia Kent's previous release, Fluffy, and with that epilogue (or stinger) where a certain ex named Parker Campbell shows up, well, consider my curiosity very much piqued. And now, here we have it, the second-chance romantic comedy read that will most certainly perk up romance readers a-plenty!

You can think of Perky as a companion novel to Fluffy or the second novel in an unnamed series--at least publicly since I don't know if the author's already got one or not--of standalones. And yes, this could very well be read as a standalone, although I'm going to seriously recommend you check out Fluffy, which is one of my top reads for 2019. Trust me, you're going to want to know Mallory Monahan and William Lotham--Mal and Will--much better.

Five years ago, Persephone Tsongas was in love with Parker Campbell and the feeling was mutual. Until one intimate moment became viral, sparking memes galore and forcing Persephone to walk away from Parker. Why? Because there were only two people around when that moment was captured and she certainly wasn't the one who posted it online. She cut off all communication between them and hasn't seen him in five years. Until today...

Parker wants nothing more than to explain himself to Persephone, but she wants nothing more than to punch him right where it hurts. Scratch that. What Perky wants--because she's Perky now, no matter how Parker (and her mother) insists on calling her by her given name--is revenge, and to seek vengeance now that he's a sitting member of Congress? Even better. So what if she still secretly loves him...and that he not-so-secretly still loves her?

Let me say the same thing I said in my review for Fluffy: GAH! Seriously, Perky was every bit what I'd hoped it would be and then some. There was wit and humor and angst and drama and everything in between. And the romance and sex! Parker was hellbent on getting his second shot at the only woman he's ever loved, and then there was hate sex, lusty sex, in love sex (aka making love), and maybe even something to do with a brown spider.

Perky and Parker (try saying that ten times really fast) were the sort of couple that had their issues--especially when it came to trust--but who still had shared a connection and a deep sort of love for one another. Julia Kent made it difficult for me to feel anything but adoration for these two, who deserved one heck of a happily-ever-after. I loved every single bit of their adorably funny love story, and can't wait for Feisty. Five-plus stars go to Perky! ♥

Read my reviews for the Do-Over series: