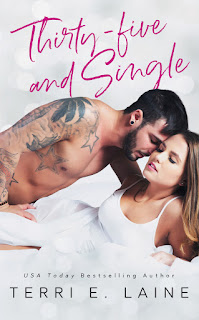 It's been about three years since I last read something from Terri E. Laine, and the blurb for her latest release sounded like something right up my alley. Thirty-Five and Single is a story about a woman who finds herself starting anew a year after catching her husband cheating on her. Marrying the boy you loved in high school doesn't always guarantee a happy ending, and with a notice that she's now legally separated from her soon-to-be ex-husband, Corey, Olivia Cole can attest to that sad fact. Her sisters encourage her to get out there and date again, but sleeping with Joel Matthews--who just happens to be a hot tattoo artist, seven years younger, a close friend, AND her neighbor--may not have been the best of ideas, especially since she was rather drunk. Joel, however, begs to differ. He's wanted to be with Olivia in the year that he's known her, and he wants to show her that they belong together.

This was a pretty good read. Olivia and Joel shared a strong enough connection, although it sometimes felt as if they spent more time apart--no thanks to Olivia's waffling and insecurity regarding their age difference--than they did as an actual couple. I seriously liked Joel and thought he had a maturity to him that Olivia sometimes lacked, as evidenced to how she handled their post-hookups. I never got to read the book in its original incarnation as a short story in an anthology, so I can't tell you what additions or changes were made. There were times, though, that the story felt choppy, but I did enjoy the actual story line and I definitely did want these two to get their happy ending.

There were quite a few side characters, i.e. Olivia's and Joel's siblings (although Olivia's oldest sister is married, I'd still like to know how she and her husband met and fell in love...unless that's already been published, and if so, someone point me in the right direction, please) AND Olivia's ex-husband (because other than the cheating, there was one particular scene in the book that solidified my need to see him find his own happiness even if it means him being paired up with who I suspect he may end up with), who have me rather curious, so I'm hoping that my gut feeling that Olivia and Joel's book is the first in an upcoming series is right. Overall, Thirty-Five and Single was a quick read that reminds us that it's never too late to start over and find true love at ANY age. This snags four stars. ♥