Review: Breakaway by Charlie Novak (Off the Pitch #1) 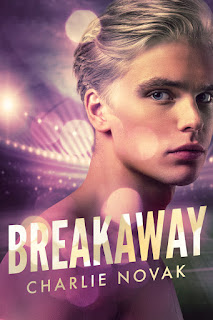 Breakaway is the first book in the Off the Pitch series and it's the debut release from Charlie Novak. Twenty-three-year-old Christian King isn't a rising star in the world of English football; he's a bona fide star in the sport, taking his team Champions League and seen as the best qualified to become captain when England makes a run for the World Cup. Football is his life and being the best on the pitch has been his goal from the moment he fell in love with the sport at age four. He has no time for much of anything else, but when his twin sister reconnects with David Cade--the same David Cade who was once Christian's closest friend and supporter...and his first love. It's been six years since Christian ended their relationship to focus solely on football, and now finds his ex-boyfriend is no longer the boy whose heart he broke. David is twenty-five and finishing up his PhD while taking his first steps into the world of academia, but he certainly has never forgotten Christian. The feelings they once shared swiftly return, but with all the demands of football and still being in the closet, will Christian walk away from David again?

This was a commendable effort from Charlie Novak, and I was left impressed with her debut novel. The whole gay athlete being in the closet (Christian King) and rekindling a relationship with his bisexual and out ex (David Cade) is nothing new, but I appreciated Novak's take on the well-read story line. This had a good cast of characters with really notable supporting characters, particularly, Lily King (Christian's twin sister), Kit Macken (David's best friend and roommate), and Liam Gold, Jordan Greene, and Hugo Serin (Christian's closest friends and teammates). The story itself was well-paced. Yes, it was predictable but I did find myself enjoying this book nonetheless, thanks to consistent writing on the author's end. Admittedly, Christian came off as younger than his actual age, with a heavier dose of naivete than I'd expected, but he was rather likable. However, it was David who takes the cake in terms of memorable characters. He was sweet and patient and far more understanding than other characters in his shoes. Novak has gotten her Off the Pitch series off to a promising start, which is why Breakaway snags four stars. ♥