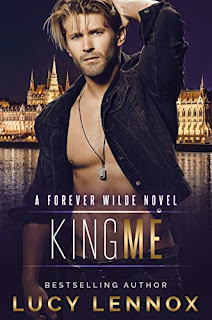 I forced myself to shut away any trace of true feelings for the enticing man beneath me and focus on the way his body made me feel. We needed stress relief from the intensity of the gala op.

That's all this was.

Yeah, keep telling yourself that...

Note to self: I absolutely need to get my ass in gear and start reading all the previous novels and novellas I missed out on in both the Forever Wilde and Made Marian series because GAH! I've only read two from the former--first was Wilde Love, which is one of my favorite reads for 2019, and now, King Me, which is the latest release--and none from the latter. I already knew I had to read the other books after reading what I consider the Forever Wilde origin story--the love story of William Wilde and Weston Marian, aka Doc and Grandpa throughout both series--but now that I've finished Kingston Wilde's story, I'm going to need to carve out time to catch up on this large extended family before Lucy Lennox publishes the next installment! Fingers crossed I have a few months for all that reading!

King Me is a cat and mouse story--except who's who between the main characters? Dirk Falcon is a thirty-year-old FBI Special Agent on the hunt for "Le Chaton", known as most of elusive of cat burglars specializing in art. Falcon once came THIS close to catching Le Chaton, only he had no clue that the the wily thief was the same man he unwittingly believed was a victim whom he released. Two years since that major clusterfuck--and one dream promotion snatched from his grasp--Falcon will come face to face with the man he knows is Le Chaton, but it's not to arrest him; no, Falcon needs the talented thief's expertise to help him regain a prized artifact, and that's what leads him to go to Hobie, Texas. Yes, Falcon's most wanted burglar left Paris, France and is back home. Le Chaton is twenty-eight-year-old Kingston Wilde. The FBI needs King to steal a crown, but will he steal Falcon's heart instead?

I loved, loved, LOVED the entire feel of this book! The story about an extraordinary thief and a tenacious federal agent forced to work together and then falling not only into bed but in love with each other guaranteed that tensions--sexual and otherwise--would be high and they totally were! King and Falcon had issues with trust, and it wasn't solely due to the fact that they saw one another as adversaries. This story and these characters gave me the same feels as two of my all-time favorite heist movies--both the 1968 and 1999 versions of The Thomas Crown Affair--even if they don't share the same plot. It has to do with that constant thrum of enthrallment, to the point that I found myself fully immersed in the story and in the outcome of the relationship between the main characters as well as some of the supporting characters. The pacing of the story and the development of the characters along with the historical background of the missing artifact had me smitten with and invested in King Me. Five-plus stars. ♥

Purchase King Me on Amazon.