Review: Once Upon a Time in Bliss by Lexi Blake writing as Sophie Oak (Nights in Bliss #8) 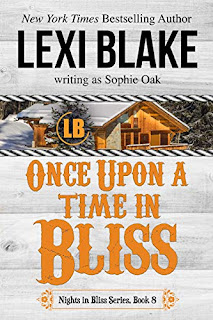 I do love me a great origin story to a favorite series, and Lexi Blake, writing under the pen name of Sophie Oak, gives fans of her Nights in Bliss series exactly that with Once Upon a Time in Bliss. This is the second edition of the book and contains new content, but since I never read the original release, I can't really tell you what's new and what isn't. Either way, this was such a treat to read, especially considering the main characters here, Nell Finn and Henry Flanders/John Bishop, are such pillars of the oh-so-quirky but seriously entertaining town of Bliss, Colorado.

Being a CIA operative brings with it a whole lot of complication matched with a whole lot of stress, so when he finally accepts a long-standing invitation from one of the very few people he considered family, John Bishop heads to Bliss, Colorado in hopes of maybe finding a bit of bliss during his stay. Finding everyone naked at his friend's nudist colony was a heck of a shock, but he intends to enjoy himself even if he's using a fake persona: Professor Henry Flanders. All he was hoping for was some fun, but he never expected to find Nell Finn or a chance at forever.

I don't think you necessarily need to read the previous books in the series BUT my feeling is that it's far more enjoyable if you do because then you know why getting Nell and Henry Flanders's love story is such a highlight for fans and readers of the Nights of Bliss books. Lexi Blake doesn't disappoint, and I dare say that Once Upon a Time in Bliss is now my favorite novel in the series AND it's the first one I've given a five-starred rating to! This was fun-filled yet also sentimental, but then I was already invested in Nell and Henry from the very first Nights in Bliss book. ♥

Purchase Once Upon a Time on Amazon | Apple Books | B&N | Kobo.