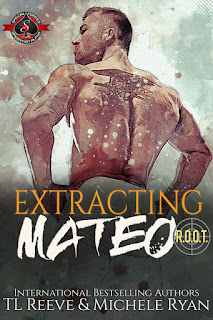 Note: An advanced reader copy (ARC) was provided by the authors via Once Upon an Alpha.

Extracting Mateo is my first read from TL Reeve and Michele Ryan, whether as a writing duo or as individual authors, and it's the second book in their Project ROOT series, which I believe is part of Operation Alpha, a collection of multi-authored books inspired by bestselling author Susan Stoker's work. I'm not entirely sure how many books have already been released under Operation Alpha, but I think that the first Project ROOT book was also part of the Stoker-inspired spin-off universe. Full disclosure: this is absolutely all pure guesswork on my part!

This book centers on forty-year-old Noah Hanover, a former Navy SEAL turned Project ROOT's resident sniper, who has been married to his husband, high school history teacher Mateo Aquino, for close to a decade. It's a marriage, however, that Noah's kept from members of his team, and it's a marriage that has its share of secrets due to Noah choosing to keep his actual job from Mateo. But then Mateo is taken by someone seeking revenge on ROOT, and now, Noah has no other choice but to bring his team in and hope they can rescue Mateo back before it's too late.

Now, I've always made it a habit to read books in a series in order because I don't want to feel like I've missed out on something, but due to time constraints, I decided to dive into this book even though I had yet to read the series starter nor was I even sure which of Susan Stoker's series this was loosely part of. This is the first time I've done the whole not reading in order thing, but I was hopeful. Unfortunately, just like all those previous times I tried to dive into the middle of a series, I was rather lost at various points of the book, not knowing who I can only assume were recurring characters to missing parts of what looks to be a multi-book story arc. So yeah, it affected my experience.

Temporarily setting the aforementioned stuff aside, the story focused on Noah and Mattie was okay and turned out to be interesting enough to hold my attention from start to finish. There were moments wherein Noah seemed to be more nonchalant than I'd expected for someone whose husband had been abducted by an unknown enemy. The mystery and suspense aspects of the story were also more muted than I was hoping for, especially in the first half of the book but things did pick up in the latter half. Being the M/M fiction reader that I am, I confess I'm a tad nitpicky when it comes to the, erm, intimate scenes, but those turned out to be pretty good here. I am curious about the next novel and I might pick up the first book as well, so I'll consider Extracting Mateo a 3.5-starred win. ♥